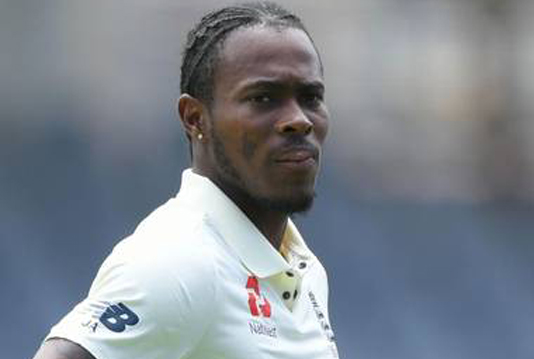 Jofra Archer said memories of the late Phillip Hughes came into his mind after he bowled a 92 mph bouncer that concussed Australia star Steve Smith during last year’s Ashes.Former Australia batsman Hughes died after being hit by a short-pitched delivery during a domestic Sheffield Shield match in 2014.
England fast bowler Archer said he had started to fear the worst when his fearsome bouncer struck Smith, now one of the world’s best batsmen, at Lord’s.
“My first reaction was that it hit the helmet but a few seconds after he went down, everyone was like ‘Oh no’,” Archer told Talksport radio as he recalled the moment Smith, a team-mate at Indian Premier League side Rajasthan Royals, fell to the turf.
“We had the stuff with Phil a few years ago and, generally, anything that hits you in that vicinity is going to be trouble,” added Archer, who was making his Test debut.
“I’m just glad that he came out on the other side of it and batted in two games.”
The 25-year-old Archer has not played since the Boxing Day Test against South Africa at Centurion after suffering a stress fracture.
But his absence has coincided with a lengthy period of enforced rest for all top-flight cricketers after COVID-19 brought major sport worldwide to a standstill.
The start of the English season has been delayed until July 1 at the earliest but officials remain hopeful a rescheduled Test series against the West Indies could get underway later in the month.
Archer may yet find himself back in an England and Wales Cricket Board training programme as soon as this week if the British government publish guidance on how elite sportsmen and women can train safely during the pandemic.
Any matches that do take place this season will be behind closed doors but Barbados-born Archer said the absence of fans might be bearable if artificial sound effects were allowed to replicate typical crowd noise.
“Playing in silence will take some getting used to, so it might be useful to play some music, some simulations of a crowd, something to create an atmosphere,” Archer wrote in his Daily Mail column.
“The best solution, if we do have to play behind closed doors, might be to have cheers and clapping when someone hits a four or a wicket falls. These are the little things that will make it as normal as possible even though it won’t be a normal occasion,” reports AFP, London.