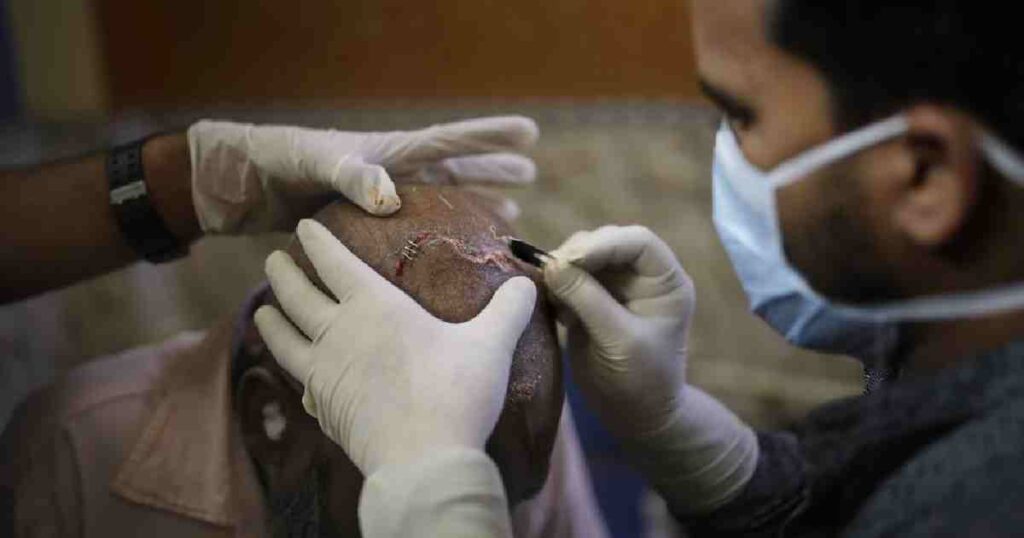 New Delhi, AP/UNB, Feb 29 – The wounded came in waves. First in ones and twos, limping up the steps and staggering through the aluminium doors, and then in wheelbarrows, with bleeding skulls and stabbed necks. Finally, the motorcycles and auto-rickshaws arrived, their seats stained with the blood of as many as they could hold. As the Mustafabad neighbourhood of India’s capital was ravaged by communal riots for three days this week, the Al-Hind Hospital turned from a community clinic into a trauma ward.
Doctors like M.A. Anwar were for the first time dealing with injuries like gunshot wounds, crushed skulls and torn genitals.
“I wanted to cry and scream,” he recalled. “Something inside of me died during those three days.”
Almost a week after the clashes between Hindus and Muslims began, a clearer picture of the horrors inflicted during New Delhi’s worst communal riots in decades has begun to emerge.
On the eve of U.S. President Donald Trump’s first state visit to India last Sunday, Hindus and Muslims in the Indian capital charged at each other with homemade guns and crude weapons, leaving the streets where the rioting occurred resembling a war zone, with houses, shops, mosques, schools and vehicles up in flames. At least 42 people were killed and hundreds more wounded.
Authorities have struggled to identify some of the bodies because of the gruesomeness of the injuries.
While both sides behaved brutally, most of the victims were Muslim.
Authorities haven’t given an official account of what sparked the riots, though the violence appeared to be a culmination of growing tensions that followed the passage of a new citizenship law in December.
The law fast-tracks naturalization for some religious minorities from neighbouring countries but not Muslims. Opponents say it violates India’s secular constitution and further marginalizes the 200 million Muslims in this Hindu-majority nation of 1.4 billion people.
The law spurred massive protests across India that left at least 23 dead.
But what unfolded in Mustafabad this week was far more brutal, with mobs hacking individuals with swords, burning people alive and bludgeoning people to death.
A Hindu intelligence bureau officer was repeatedly stabbed and his dead body thrown into a sewage drain that divides Hindu and Muslim residential areas. A Muslim man had his legs spread so far apart that the lower half of his body tore. His condition remained critical.
Questions have been raised about the role of the New Delhi police and whether they stood by while the violence raged or even aided the Hindu mobs.
A New Delhi police spokesman, Anil Mittal, denied that police had aided rioters.
Al-Hind hospital’s doctors said authorities kept ambulances from reaching certain riot-hit places.
A little after midnight on Wednesday — more than 72 hours after the violence began — a New Delhi High Court passed an extraordinary order directing the police to provide safe passage for ambulances.
It was too late for many victims.
With streets taken over by the mobs and no way through for ambulances, Anwar knew early on that his clinic would soon be overcome with wounded.
Some slumped in plastic chairs as they draped gunshot-riddled arms and legs over tables.
Others just lay on the floor, bleeding.
Those who were there described the blood and chaos, but also shared oddly uplifting stories of teamwork and grit.
“We didn’t sleep. We didn’t eat anything. All we wanted to do was save lives. And we did,” said Aanis Mohammad, a volunteer at the clinic. “No patient of any religion was turned away.”
By mid-afternoon Wednesday as the violence came to an end, Anwar and his overwhelmed colleagues had treated more than 400 people and referred almost 100 to larger hospitals. Dozens, however, remained at the clinic in critical condition.
The hospital also gave refuge to those fleeing the violence, providing more than 50 people with food, bedding and safety.
Clean-up efforts in Mustafabad are underway but the scars are still visible.
At Guru Teg Bahadur hospital along New Delhi’s eastern border, 18-year-old Salman Ansari waited for his father’s body to be handed over.
Ansari’s father had gone out to collect scrap for money as there was no food in the house. After seeing police assurances on the news, he thought it would be safe. It wasn’t.
Ansari said he was sleeping when two strangers dumped his father outside their home early Wednesday.
He carted his father 3 kilometres

(1.8 miles) on the family’s rickshaw to a private clinic. The doctors demanded 5,000 rupees ($69). His pockets were empty.
By the time Ansari managed to reach a public hospital, his father was dead.
For Anwar, the doctor, he said he eventually grew numb to the carnage. Yet he’s still coming to grips with how fellow Indians could do what they did to one another.
“It’s as if evil had pervaded and housed itself in the hearts of the mob,” he said.