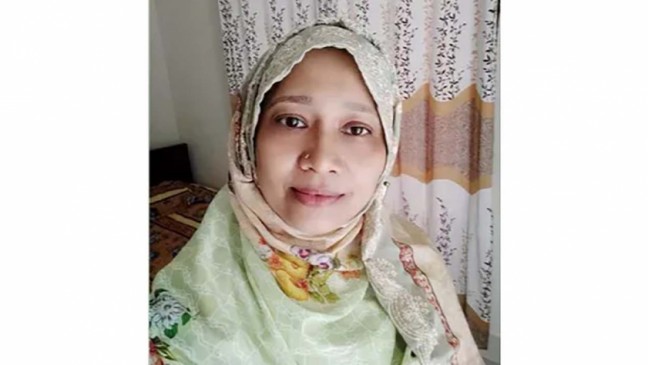 Dhaka, May 31 :  Police on Monday recovered the body of a female physician from a flat in the city’s Kalabagan with an officer suspecting it may be a case of murder.The victim was identified as Dr Sabira Rahman, wife of a private bank official Shamsuddin Azad.
Primarily, it seems that it is an incident of murder, OC Kalabagan police station Paritosh Chandra said.
The husband also claimed that his wife was killed.
Dr Sabira worked in the Radiology Department of Green Life Hospital in Dhanmondi.
Quoting neighbours, police said Dr Sabira shared the flat with another woman named Kaniz Subarna .Her husband Azad lives at Shantinagar.
Officer-in-charge of Kalabagan Police Station Paritosh Chandra told UNB that being informed, a team of the police went to the flat at around10:30 am and recovered the body from inside her room.
Kaniz Subrina, who completed LLB from World University, told Police that she went out on morning walk along Dhanmondi lake at around 6:10 am.
On return to the flat she smelt smoke was coming out from Dr Sabira’s room. As her room was locked from inside, she informed the matter to gatekeeper of the building, said the OC Kalabagan adding that they finally entered the room breaking the lock of the door.
The body of the deceased bored four injury marks at her backside, with a big one on her neck.
A CID crime team collected evidence from the spot. The detective Branch of the DMP detained four people, including Kaniz Subrina, one of her friends and the gatekeeper, for interrogation, he said.
The body was sent to Dhaka Medical College Hospital morgue for post mortem.
Azad went to the Kalabagan flat after learning about the tragedy. He claimed that his wife was murdered. “My wife has been killed. There is no doubt here,” he added, reports UNB.