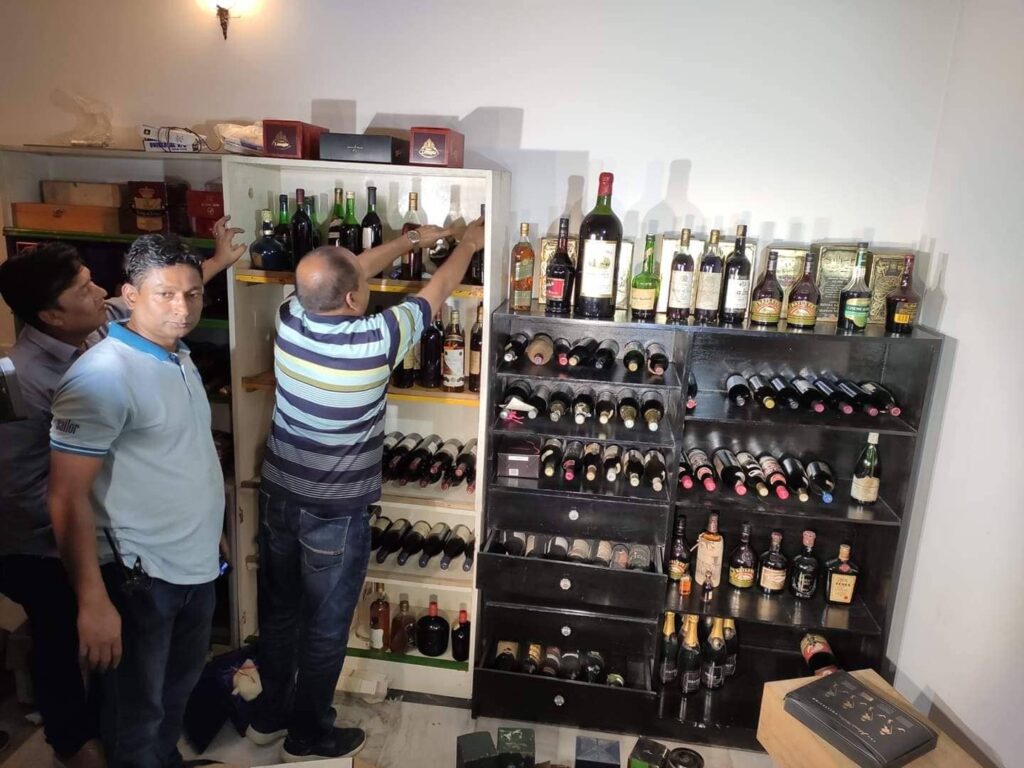 Dhaka, Oct 27 – Members of Department of Narcotics Control (DNC) yesterday conducted drive in the house of Aziz Mohammad Bhai, a businessman and producer of Bangladeshi film.Khurshed Alam, Assistant Director (AD) of DNC confirmed about the drive to journalists and said they arrested two person from his house at Gulshan-2 road no 57, house no 11/A. The team started the raid shortly before 5pm.
The detainees are Nabin, 25 and Parvez 30, are the care taker of the house, said the AD.
The DNC also recovered huge amount of drugs including foreign liqueur, several hookahs, glass bongs, and casino related equipment.
Khurshed Alam said they found a mini bar in the rooftop of his house; however Aziz Mohammad Bhai was not in the house.
According to the officials of DNC, His house is dived into two parts. There was casino in his house. They also recovered a liqueur store. The DNC officials also found dollar coin, which is used to play casino.
The DNC officials assumed that only dollar is used to play casino in his house.
In 1996 the Securities and Exchange Commission initiated several cases against 15 firms and 36 individuals after billions of taka were drawn from investors allegedly by raising share prices through market manipulation.
In 1997 Aziz Mohammad Bhai was alleged to be involved in the alleged murder of the actor Salman Shah. Bhai denied the charges, but he was barred from entering India and his passport was impounded.
In 1999, Bhai was accused of involvement in the death of actor, Sohel Chowdhury.
It is mentioned that in 1947 the family of Aziz Mohammad Bhai came to Bangladesh from Gujarat. His family was mainly Persian origin. They were from Bahaiyan community. The short name of Bahaiyan is Bahai which later termed into Bhai. They lived in old town of Dhaka. In 1962 Aziz Mohammad was born in Armanitola of Old Dhaka.
In 2007, he was charged for manufacturing yaba tablets. His nephew, Amyn Huda, was sentenced to prison in 2013 in these crimes.
Bhai was actively engaged in the management of a steel producer for more than three decades. He is a life member of the SAARC Chamber of Commerce. He is a director of Olympic Industries Limited and his father is the chairman of the company.
The drive was continuing till filing the report around 7:00 pm. – Staff Reporter