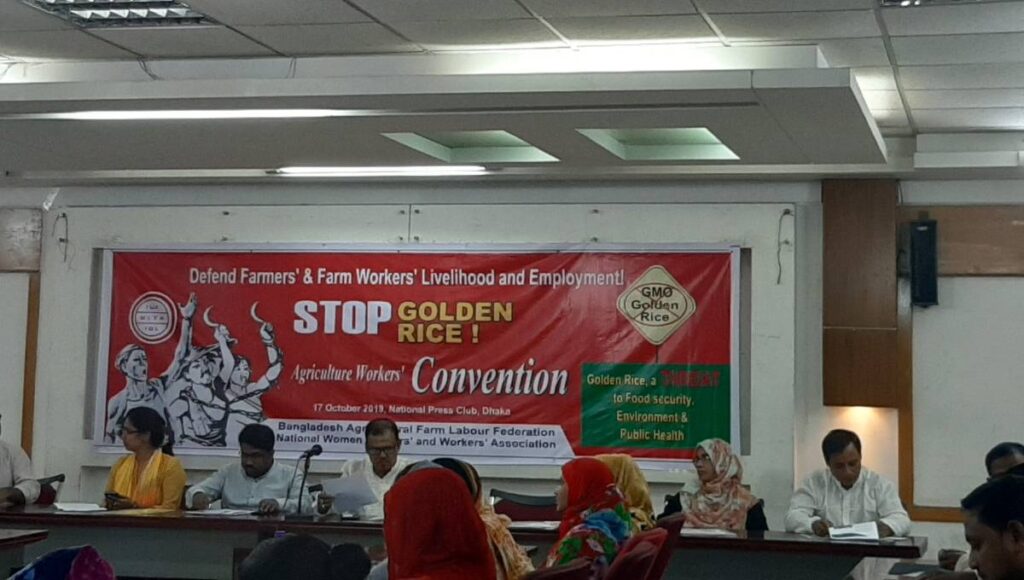 Dhaka, Oct 17 – Highlighting the negative effects of genetically modified (GM) food on human body, speakers at a convention on Thursday urged the government and other stakeholders to stop the commercial production of GM golden rice being marketed as an ‘healthier alternative’ to regular rice. “The burden of golden rice has been imposed on the country in the name of nutrition. The inventors of golden rice have failed to provide any proof to guarantee its safety. Worldwide it has been rejected as a failed innovation,” said Nasrin Sultana, a representative of the International Union of Food.
She and other speakers gave their opinions at the convention jointly arranged by Bangladesh Agricultural Farm Labour Federation (BAFLF) and National Women Farmers & Workers Association (NWFA) at the Jatiya Press Club.
“In terms of crop, environment and health, golden rice is a controversial product. The most alarming factor is that scientists haven’t been able to provide any solution to the GM food effect on human body,” Nasrin said while presenting the keynote paper.
GR2E is developed by splicing three foreign genes — two from corn and one from a bacterium — into BRRI dhan29, the ‘Golden Rice’ which is said to be capable of producing beta carotene alias pro-vitamin A.
“Although the paddy has been marketed as a rich source of beta carotene, 84 percent of that gets damaged within six months if not packed and stored in regulated temperature,” Nasrin said, citing the findings of a research carried out by the Indian government.
According to a report of the United States Food and Drug Administration, golden rice contains a low level of beta carotene which is not sufficient to tackle vitamin deficiency.
British Food Chemistry Journal data show that golden rice loses three-fourth of beta-carotene if stored within eight months of production.
BAFLF General Secretary Abdul Majid said the lack of bio safety studies while introducing golden rice in the country’s market is an alarming matter.
“The reason behind commercial farming of golden rice without ensuring the safety of public or environment is nothing but protecting the interests of multinational companies and increasing their profit,” he said.
Speakers held the weak bio-safety law as the key reason behind GM food lobbying in Bangladesh.
“Because of our ineffective bio-safety law, multinational companies are using the country as the testing ground for GM crops,” said Abdul Majid.
BAFLF and NWFA put forward a set of proposals that include banning the golden rice and BT brinjal, introducing stricter bio-safety law and providing effective help to farmers in preserving domestic seeds. – UNB