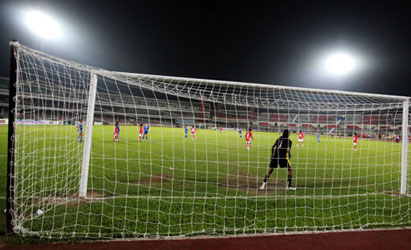 Hosts Bangladesh had embarked on the AFC Women’s Asian Cup Qualifiers campaign with trepidation, against opponents they hardly knew much about, apart from the fact that they were in a league much bigger than their own.For a team which had never ventured out of the South Asian level, winning was more wishful thinking rather than pragmatic demand. And as expected there was no odd win for the hosts, but two respectable defeats out of three and more importantly a wealth of experience of playing against these opponents were what they gained.
Bangladesh’s campaign for qualification started on the wrong note with a morale-shattering 9-0 defeat against eventual champions Thailand, and it ended with a relatively respectable 4-0 defeat against high-flying Philippines at the Bangabandhu National Stadium yesterday, after a 2-0 defeat against Iran three days ago.
The signs of improvement were very much visible in yesterday’s match as, despite the wide margin, Bangladesh managed to create a few real scoring chances in counter attacks against the ultra-attacking Maltidas.
Sabina Khatun, the prolific striker on domestic circuit, was on the end of those chances but she failed to find the back of the net, with Philippines goalie blocking on two occasions while a defender clearing the danger on the other occasion.
However, the pressure was mostly at the other end where goalkeeper Sabina Akter made a number of decent saves to keep the scoreline to a respectable level.
The four times she was beaten though were in the 19th minute when Maria Park placed a shot from inside the box; in the 29th minute when Jesse Anne Shugg toe-poked from goalmouth melee; in the 85th minute when she failed to judge the direction of a long-range effort from Catherine Ruth and right on the final whistle when Maria scored her second with a nod-in from goalmouth melee.
The Filipinos were ecstatic for putting on an impressive show despite losing out to Thailand for the single qualifying spot, while Bangladeshis were left to lick the wounds of conceding 15 goals in their first real test.
(Source: Agency)