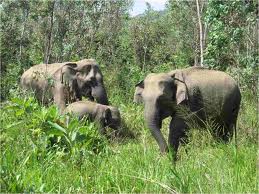 Severe food crisis has kept the lives of more than 50 animals of different species in danger at Tengragiri eco-park in Taltoli of Barguna district.As there is no allocation from the government side, the local forest department authorities are trying hard to save the animals managing food for them on credit.
For expansion of eco-tourism in the reserve forest of Tengragiri, the Environment and Forest Ministry took some initiatives in 2010-11 and 2011-12 fiscal years.
The initiatives include building cages for deer, pigs and fishing cats, crocodile breeding centre, picnic spot, rest house and a 1200 metre walkway.
Forest official sources said a total of Tk2.63 crore has been spent in the two fiscal years for the works under the project titled ‘Enhancement of Eco-tourism Facilities’.
Under the scheme, at least eight deer, 25 pigs, two fishing cats and three crocodiles were released in the Tengragiri echo park from January to March of the current fiscal year (2012-2013).
But the government has not arranged anything so far for their treatment and food. Sources said the authorities of the park were trying hard to save the animal by providing them with food bought on credit from the local shops or with money taken on loan from the shop owners.
Local UP member Salam said most of the animals have become sickly for want of sufficient food and treatment.
Kamal Hasan, a politician, said this is not right to keep the animals in the park this way without ensuring their food and treatment. The animals can move in the area freely but they do not get any food from there, he added.
Yunus, chairman of Shonakata union Parishad, said Tengragiri reserve forest is one of the best tourist spots of Bangladesh. So the government needs to take necessary steps to protect its animals.
Mizanur Rahman, an official of Tengragiri eco park, said there is no food stock for the animals.
They collect food from the local shopkeepers on credit. Being aware of the matter, the high officials of the forest are trying to arrange food for the animals, he added.
Mihir Kumar Dey, an official of the forest department, said as they could not keep the animals starving, they buy foods on credit and the money will be paid after receiving fund from the government.
(UNB, Barguna)