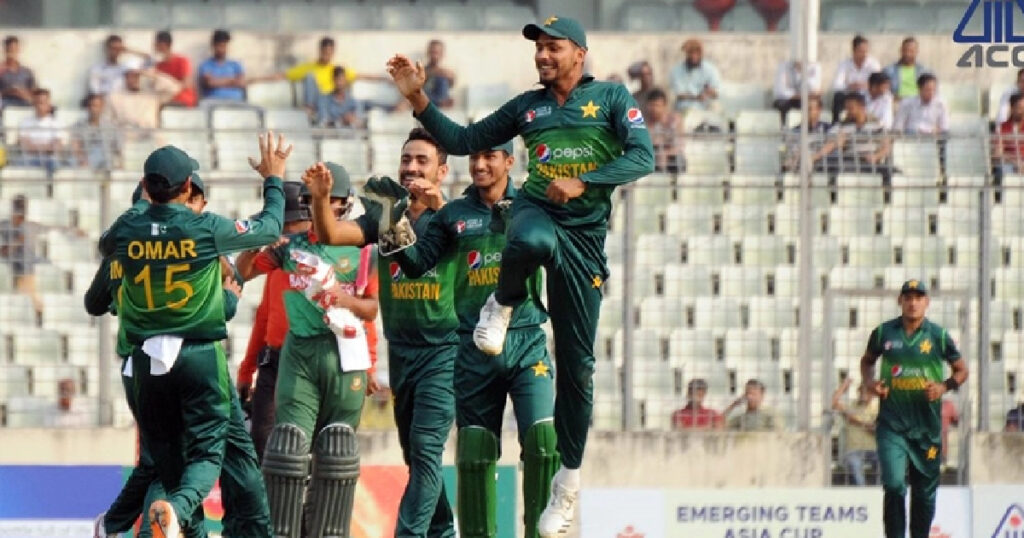 Dhaka – Hosts Bangladesh handed a huge 77-run defeat against Pakistan in the high-scoring final of the eight-nation ACC Emerging Teams Cup (Under-23) Cricket Championship at the Sher-e-Bangla National Cricket Stadium in Mirpur on Saturday.

Hosts Bangladesh, which stormed the final with all-win record, had a good opportunity to clinch their maiden title beating Pakistan in the final, but they failed following footprint of their seniors back in 2012.

Earlier in 2012, Bangladesh’s dream was shattered as the Tigers suffered a shocking two-run defeat against Pakistan from a winning position in the Asia Cup Cricket final in Dhaka.

Later, they reached the final eliminating Afghanistan by 7 wickets in the 2nd semifinal on Thursday last.

In the final, Bangladesh sent Pakistan to bat first after winning the toss.

The two-time runners-up of ACC Emerging Cricket Teams Cup, Pakistan, piled up a massive total of 301 for 6 in 50 overs, featuring a century by Rohail Nazir.

Nazir, was adjudged man of the match, smashed 113 runs off 111 balls, hitting 12 fours and 3 sixes, Imran Rafiq scored 62 off 88 featuring 4 four and 2 sixes while captain Saud Shakeel scored 42 off 40 balls with one four and 2 sixes.

On their way to the final, Pakistan also maintained all-win record in Group A beating Afghanistan by 8 wickets in their first match, Sri Lanka by 90 runs in second match and Oman by 147 runs in their third and last group match.

Pakistan confirmed their spot in the final eliminating arch-rival India by 3 runs in a nerve shattering first semifinal on Wednesday last.UNB