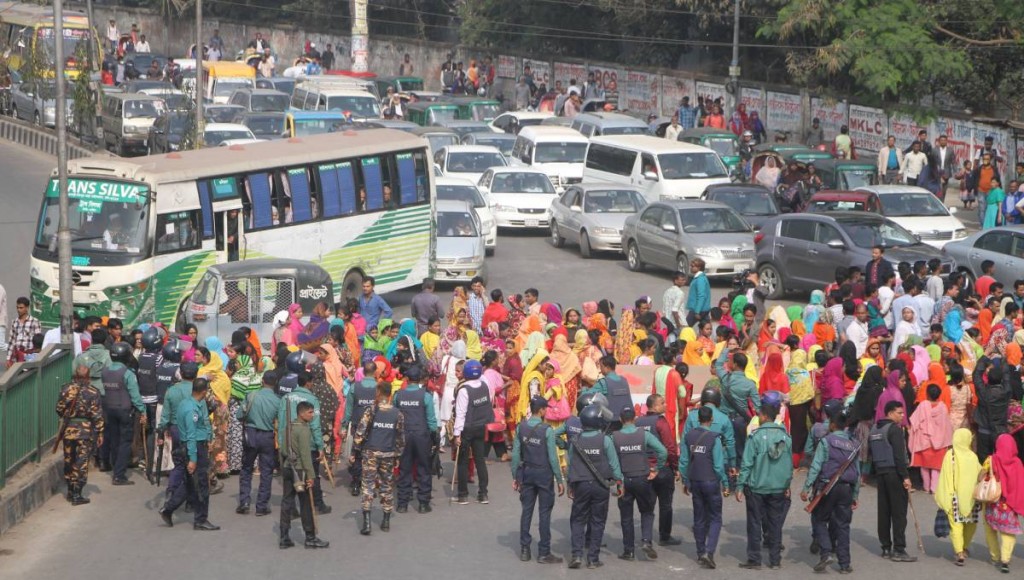 Dhaka, Jan 12 –Readymade garment (RMG) workers demonstrated for a sixth consecutive day on Saturday in the capital, Ashulia and Gazipur demanding higher wages. The protesters’ demands include implementation of the government-announced wage board and disperse the ‘discriminations’ in it.
Continuous protests forced at least 50 factories to suspend operations for the day while pitched battles with police left dozens of workers injured.
RMG workers took to the streets in the morning and put up barricades at Mirpur-1 and Ansar Camp areas, halting vehicular movement. They also demonstrated at Shewrapar, Kazipara, and Begum Rokeya Sarani.
Police said the barricades were withdrawn around noon.
In Gazipur, hundreds of workers from different garment factories staged demonstrations.
Police charged batons when workers of ‘Target Fashion Factory’ tried to block the Dhaka-Gazipur Highway in Chandona Chowrasta.
Workers alleged that thugs hired the factory owners had attacked them in BCL area as they had refused to join work.
RMG workers also fought a pitched battle with police when they tried to block Dhaka-Tangail Highway in BSCIC area in Konabari.
At least 30 factories were closed for the day following the unrest.
At least 20 workers were injured in clashes with police at Jamgora in the morning. The skirmishes prompted at least 20 RMG factories to call off operations for the day.
Border Guard Bangladesh troopers are patrolling the areas to prevent further escalation of unrest.
In Ashulia, at least 10 workers were injured after a clash with police at Kathgora, forcing several factories to close.
Industrial police’s Director Shaminur Rahman said they dispersed workers who tried to block the roads.
Additional police have been deployed in front of the garment factories to prevent escalation of the situation. – UNB