Health Minister Mohammed Nasim visited the centre in the day and met the press flanked by Prof Khan who spoke about the past successes and future plans.

Nasim congratulated them on their successes, and urged the rich to come forward to support the centre so that the poor can afford the sophisticated service.

The centre was inaugurated on Oct 20, 2013 on the ninth floor of the new DMCH building, which was remodelled, with the help of the Boston’s Massachusetts General Hospital (MGH).

MGH trained up its nurses and doctors while the government spent about Tk 200 million on the whole project.

The transplant began in Mar 2014, ushering in a new era in Bangladesh’s medical science.

There are no official data about people needing bone-marrow transplants in Bangladesh but doctors say many go abroad for this replacement.

But the costs in Bangladesh are less than a third of what it costs abroad.

The centre is offering ‘autologous’ transplant procedure in which one’s own bone marrow is used.

Prof Khan said his plan was to introduce the ‘allogeneic’ procedure which is more critical because in this process, the bone marrow of siblings or donors is used.

He said they also want to launch ‘marrow donor programme’ to collect bone marrow for the allogeneic procedure.

He urged the rich to come forward so that they can set a public-private-partnership model to run the government centre, reports bdnews24.com. 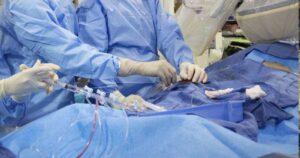 Big study casts doubt on need for many heart procedures