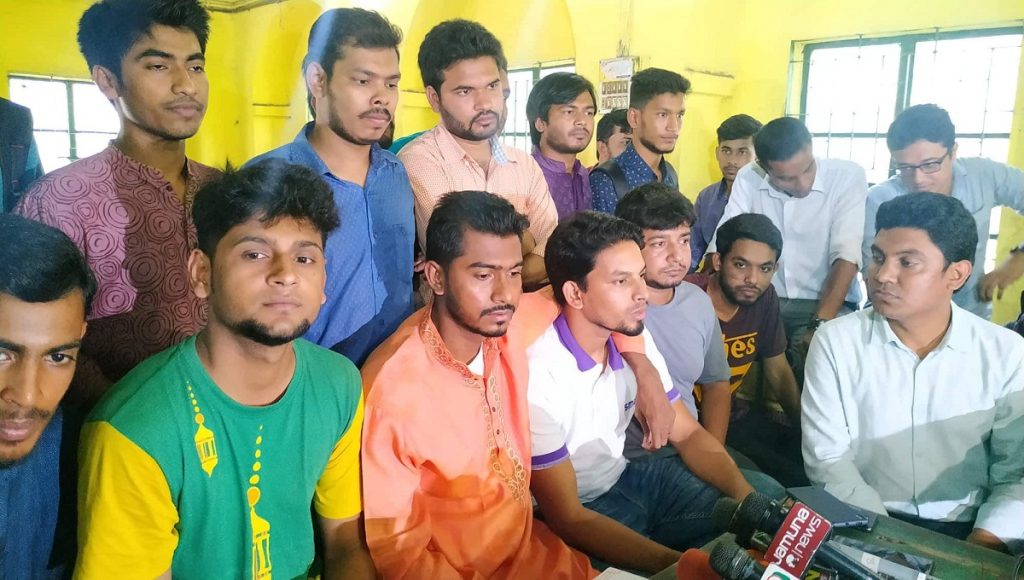 Dhaka, Dec 8 – The Chhatra League panel members of Dhaka University Central Student Union (Ducsu) have demanded the resignation of its Vice President (VP) Nurul Haque Nur over allegations of corruption.
In the meantime, Nur has claimed he will submit his resignation if any allegations against him are proven true after investigation. Some 23 Chhatra League members of Ducsu, headed by its General Secretary Golam Rabbani, raised the complaints in a press conference held at the Ducsu office building on yesterday.
During the briefing, they brought an allegation of illegal tender business and illegal money transaction against him.
They came up with the allegation after an unverified audio clip, in which a person was heard requesting another to be a bank guarantor of a project.
Where in another conversation between the Ducsu vice-president and an expatriate Bangladeshi over a monetary contract, both were leaked on a private broadcasting channel on December 3.
In the audio clip, the expatriate asked Nur to send his bank account along with an email address.
Ducsu member Rakib Hossain Rakib read out a written speech where they demanded the resignation of Nur.
It stated that Nur should be investigated for corruption, which was revealed in a leaked phone call conversation.
In a phone call with this correspondent, Nur said only a portion of his telephonic conversation which was happened back in two months ago, published now with an ill motive to tarnish his reputation.
Terming the conversation completely personal and business-related in nature, Nur claimed that he was talking to a man he knew about a bank guarantee of Tk 13 crore for his aunt’s construction firm.
Nur said: “After all this, if the allegations against me are proven, then they [Ducsu Chhatra League panel members] will not have to ask me, I will resign myself.”
He added: “How can a person (Rabbani), who is accused in cases of extortion, tender business and drug abuse, raise such allegations against someone else?”
Meanwhile, Rabbani answered the queries of the reporters.
Through the speech, BCL panel of DUCSU claimed that Nur has not spent a dime from the budget of Tk5 lakh that is allocated for the Ducsu vice president to spend on student welfare.
When reporters asked that VP Nur mentioned several times that his application to withdraw the money went unanswered, Rabbani said Nur has not filed any applications.
Recently, Rabbani was removed from his position as general secretary of central Chhatra League when an allegation came to light that he and the then-president Rezwanul Haque Chowdhury Shovon approached to extort money from Jahangirnagar University Vice-Chancellor (VC), Prof Farzana. – Staff Reporter