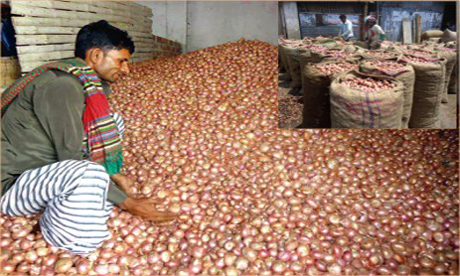 Dhaka, Dec 8 – While some of the imported onions were relatively cheaper, but the local newly harvested and old onions were still selling at higher prices in the capital’s kitchen markets.
Though the local onion price was relatively down from the last week it still is selling at above Tk 200 in the kitchen markets of Dhaka.Yesterday visiting at the markets, this correspondent found that local onions were selling between Tk 200 and 230 a kg in the retail market and the imported ones between Tk 100 and Tk 210 a kg. Prices of Egyptian and Chinese onions have dropped by Tk 10 to 20 a kg in three to four days.
Each kg of Chinese onion was sold at Tk 100-110 and Egyptian onion at 120, said Khalilur Rahman, a retail trader at Mirpur’s Muslim Bazar kitchen market. Onions imported from Myanmar were priced at Tk 220 a kg, local old onions at 230 per kg, and local immature onions were being sold at Tk 190 per kg.
Because of prices of onions are still eye-watering despite different types of onions imported from several countries are now available in the kitchen markets the selling of this cooking ingredient have been reduced in a large manner.
Kashem, a wholesaler at Karwan Bazar, said, “Although the demand for domestic onions is high, their sales have declined sharply. I can’t even sell a sack of onion a day but had sold 40 to 50 sacks a day before. As prices go up, people have reduced the consumption of onions to a great extent.”
To keep the onion prices in check, the government has been importing the essential cooking ingredient by air and sea and selling those through its trading arm, the Trading Corporation of Bangladesh, at Tk 45 per kg throughout the country.
Several business groups have been importing onions from China, Egypt, Turkey, Myanmar and Pakistan.
Ratan Chandro, an importer at Shyambazar in Dhaka, said, “The supply of old onion sold at the highest prices is almost exhausted. This situation will continue for at least 10 more days. Then the prices of all types of onions will come down below Tk 100 a kg.”
Last week, Commerce Minister Tipu Munshi also said the onion price will become stable within the first week of December when imported and local onions hit the market. “Huge imported onions are coming to markets. The onion will be available in the market within the next 10 days. Onion costs Tk 32 per kg to reach the port. It’ll be sold at maximum Tk 60 per kg. Besides, the local onion will hit the market during this time,” he had said.
However, there is no reflection of the huge import and the minister’s comments on the market as onions are still selling at higher prices.
According to the Ministry of Commerce, 4,159 tonnes of onion were imported through different ports on Thursday alone. It also said the import will continue until the supply of onion and its prices become normal. – Staff Reporter