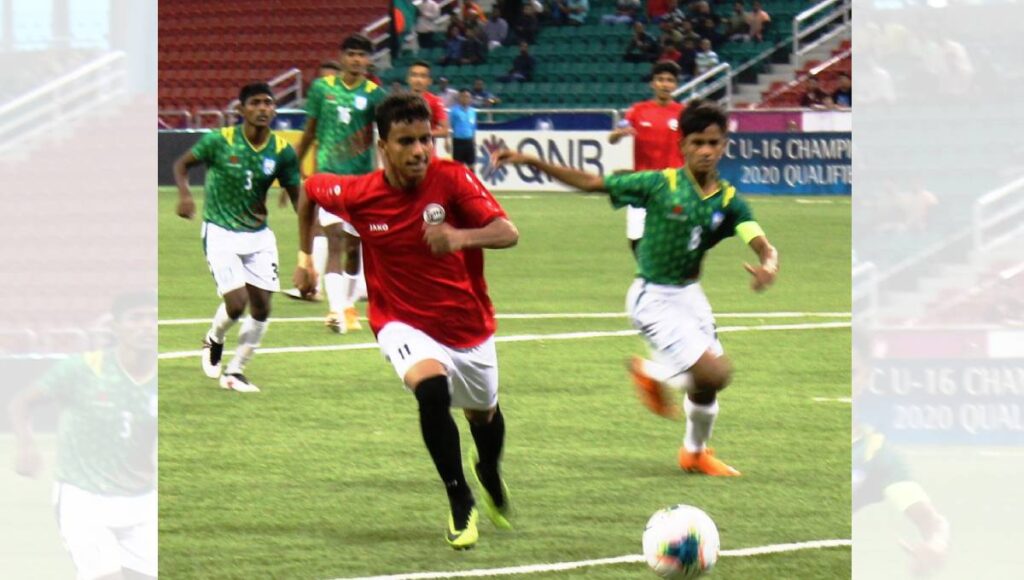 Dhaka – Bangladesh Under-16 Football team ended their campaign of the AFC U-16 Championship’2020 Qualifiers conceding a 0-3 goals defeat against stronger Yemen in their 3rd and last group match at Aspire Dome Indoor Stadium in Doha on Sunday.

Forward Hamzah Ahmed Mahross scored twice while another forward Md Ali Hasan netted one for Yemen.In the first half of the game, Yemen produced some good chances for dominating Bangladeshi defence but most of their efforts went in vain.

In the 2nd half, Yemen continued domination with their attacking football and bagged its result in the 64th minute while forward Md Ali Hasan netted the ball with a close range left footer shot from inside the box, utilizing a pass from midfielder Abdulrahman Adel Al-Shami (1-0).

In the 72nd minute, substitute forward Hamzah Ahmed Mahross doubled the margin by a close range header from the goal mouth melee, off a corner from midfielder Md Radhi Ebrahim (2-0).

Just after six minutes, forward Mahross widened the margin netting his 2nd goal of the competition by a low-range left footer shot from the danger zone in the 78th minute, from a pass by another forward Md Ahmed Mahdi (3-0).

Yemen missed another chance to widen the margin in the stoppage time (94th minute) while Bangladesh goalkeeper Md Mehedi Hasan denied the penalty with a fine save from defender Hesham Ahmed Balabl.

Bangladesh, which put in the Group E of the AFC junior meet along with Qatar, Yemen and Bhutan, started their campaign conceding a 0-2 goals defeat against hosts Qatar in their first match on Thursday night but bounced back in the race crushing Bhutan by 3-0 goals in their second match on Friday.