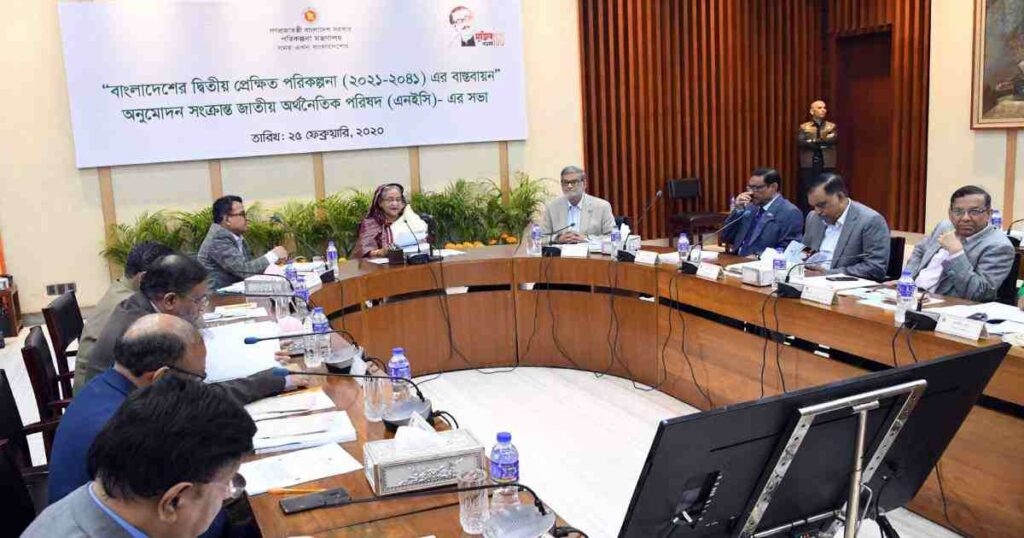 The National Economic Council (NEC) on Tuesday approved the country’s 2nd Perspective Plan 2021-2041, aiming to make Bangladesh a higher-income and developed country by 2041.

The approval came at the NEC meeting, chaired by NEC Chairperson and Prime Minister Sheikh Hasina, as the ‘Perspective Plan of Bangladesh: 2010-2021’ is going to be completed.

“This historic document has been framed and approved aiming to alleviate poverty, strengthen good governance further and transform Bangladesh into a modern and world-standard Digital country,” said Planning Minister MA Mannan while briefing reporters after the meeting.

He said the document was designed for the next 20 years based on four institutional pillars –governance, democratisation, decentralisation and capacity building.

Mannan said though the NEC gave approval to the Perspective Plan, the ministries and divisions would be able to provide their further inputs within the next one month for incorporation in it.

Alongside bringing down the poverty rate below 3.00 percent, the objectives of the perspective plan are to remove the extreme poverty by 2030, ensure industrialisation and its structural transformation, bring exemplary change in the agriculture sector and build an export-oriented economy.

The Planning Minister said the NEC meeting suggested incorporation of a strong message that Bangladesh is a welfare-oriented country in the perspective plan.

The meeting also suggested focusing further on the role of expatriates, agro-processing industries, incorporation of the prospects of the 4th industrial revolution and ICT, skill development, agriculture, rural poverty eradication, education and researches, and tourism infrastructures, he said.

Mentioning that the lion share of the funding of this mega plan is expected to come from domestic sources, he said, “We’ll depend mainly on our local sources to implement this plan.”

General Economics Division (GED) member of the Planning Commission Dr Shamsul Alam said the Perspective Plan is a historic and dream document for the country as it gives a guideline about what would be the socio-economic position of Bangladesh over the next 20 years.