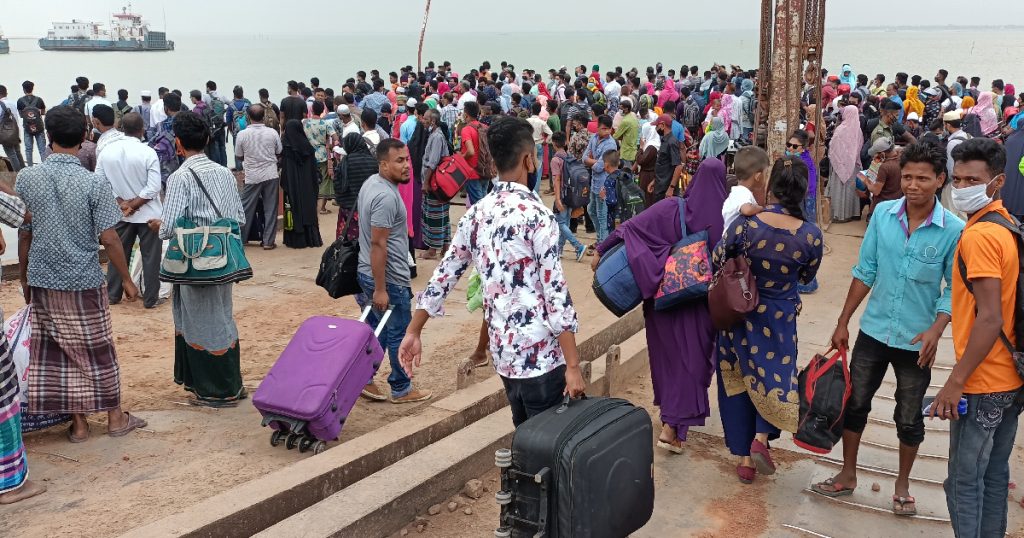 Dhaka, May 9 -Border Guard Bangladesh (BGB) teams have been deployed on the Paturia-Daulatdia and Shimulia-Banglabazar routes in Manikganj and Munshiganj from Saturday night to control the mad rush of homebound people. Md Shariful Islam, Public relations officer of the BGB headquarters confirmed the development.
He said that strong actions will be taken against those gathering at the ferry terminals despite the suspension of water vessels plying from Sunday.
Earlier, Paturia ferry terminal saw a mad rush of homebound people ahead of Eid despite a decision of Bangladesh Inland Water Transport Corporation (BIWTC) to suspend daytime ferry services.
BIWTC took the decision late Friday night to suspend daytime ferry services on Paturia-Daulatdia and Shimulia-Banglabazar routes from Saturday morning as per government instructions to curb the spread of coronavirus infection ahead of Eid-ul-Fitr.
However, three ferries were selected to transport ambulances and hearse vehicles.
While visiting Paturia ferry terminal early Saturday morning, the UNB correspondent saw flocks of people stranded there, completely unaware of the late night decision of BIWTC.
Although some of them were forced to return, hundreds of passengers continued to hold their ground in an attempt to celebrate Eid with the loved ones at any cost.
When an ambulance carrying a dead body was getting into the Madhobilota, a ferry kept for emergency situations, hundreds of these people forced themselves onto it.
The same incident happened with two other ferries anchored at separate terminals of Paturia.
After a few hours, two of those ferries, carrying hundreds of people, left the terminals and this was more or less the entire story of the day, which means the late night suspension of BIWTC has proved insufficient.
However, Jillur Rahman, deputy general manager of Bangladesh Inland Water Transport Authority (BIWTA) Aricha office said, “At all times the plying of water vessels has been suspended following BIWTC’s decision. Only three ferries are operational for emergency use. But we are facing difficulties in operating them because of excessive pressure by people wanting to get in.” – UNB