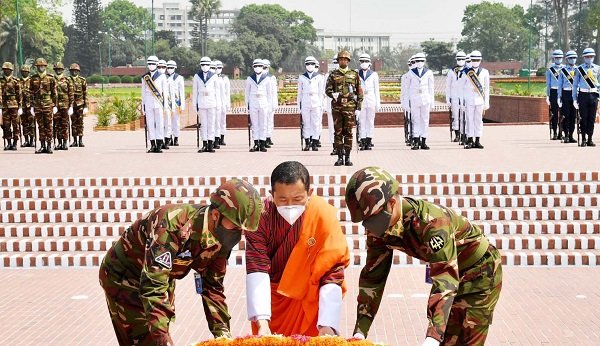 Dhaka, Mar 23  : Bhutanese Prime Minister Dr Lotay Tshering on Tuesday paid tributes to the Liberation War martyrs and Father of the Nation Bangabandhu Sheikh Mujibur Rahman.Upon arrival, he visited the National Martyrs’ Memorial at Savar where he paid homage to the Liberation War martyrs by placing a wreath.
Prime Minister Dr Tshering also visited Bangabandhu Memorial Museum in the city to pay tribute to Father of the Nation Bangabandhu Sheikh Mujibur Rahman. He signed visitors’ book there after placing a wreath on Bangabandhu’s portrait.
This year also marks the 50th anniversary of the recognition of the independence of Bangladesh by Bhutan and the friendship between the two countries.
On 6th December ,1971, Bhutan became the first country to recognize the independence of Bangladesh.
The Bhutanese Prime Minister considers Bangladesh as his second home where he embraced his dream of becoming a doctor and learned the traits of saving lives.
This time, according to Bhutan’s Prime Minister’s Office, he is an emissary carrying special prayers of The King and love of the people of Bhutan.
Dr Tshering will join his friends and the people of Bangladesh in the celebration of the centennial birth anniversary of Bangabandhu Sheikh Mujibur Rahman and the golden jubilee of the independence of Bangladesh.
A red carpet was rolled out at Hazrat Shahjalal International Airport (HSIA) in Dhaka on Tuesday morning as Bhutanese Prime Minister Dr Tshering arrived here on a three-day official visit.
The Bhutanese Prime Minister is the fourth among the world leaders after that of the Maldives, Sri Lanka and Nepal to attend the celebrations of the birth centenary of Bangabandhu Sheikh Mujibur Rahman and the Golden Jubilee of the country’s independence.
Prime Minister Sheikh Hasina welcomed him at the VVIP tarmac of the airport presenting him with a bouquet.
Dr Lotay Tshering was given an honour guard by a smartly turned out contingent drawn from the Bangladesh Army, Navy and Air Force at the airport.
Both the Prime Ministers witnessed the state honour from a makeshift dais as the national anthem of the respective countries was played.
On Wednesday, Lotay Tshering is scheduled to meet Prime Minister Sheikh Hasina at the Prime Minister’s Office (PMO) and it will be by bilateral talks.
After the talks, a couple of MoUs are likely to be signed between Bangladesh and Bhutan to enhance the cooperation between the two countries.
The Bhutanese Prime minister will pay a courtesy call on Bangladesh President Abdul Hamid at Bangabhaban.
Later, in the afternoon, Lotay Tshering will join the celebration at National Parade Square as the guest of honour. Prime Minister Sheikh Hasina will receive him there.
This is Prime Minister Dr Tshering’s second visit to Dhaka after assuming the office in November 2018, according to the Ministry of Foreign Affairs, reports UNB.