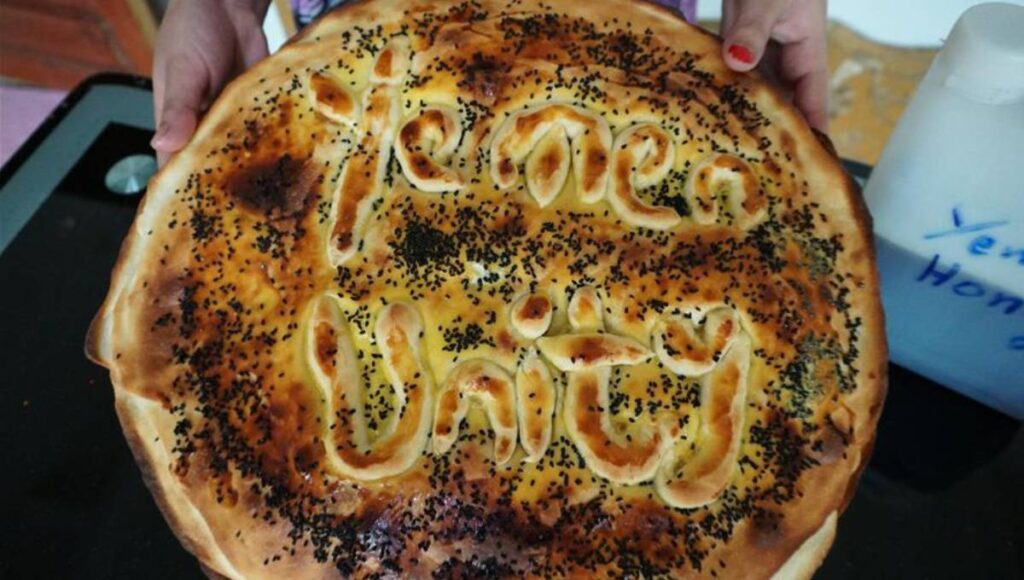 Yemen’s girls are very skilled in cooking “Bint al-Sahn,” a large flaky pastry kneaded from a mixture of flour, water, eggs, sugar and clarified butter that gives the dish a shiny golden color.The dough is sprinkled with nigella seeds. The dish is served warm with natural Yemeni honey drizzled on top.
Young people adore this sweet dish. This is the must-served dish in any engagement and wedding parties, especially in the northern parts of the country.
Amal Mutahar, a sociology teacher, told Xinhua that Bint al-Sahn is the most famous dish of the Yemeni cuisine, and is part of the traditional culture in all Yemeni family events.
Amt-Alrzak Jhaf, a social activist and specialist in the Yemeni folk food, said the origin of this dish is the historic Old Sanaa City in the heart of the capital Sanaa.
According to many grandmothers in the Old Sanaa City, Bint al-Sahn traditionally used to be a must-served dish at engagement parties, in which the mother of fiancé asked about the fiancée’s cooking and housekeeping skills.
In response, the mother of fiancee presents Bint al-Sahn dish to the mother of fiance, saying while pointing at the dish: “please look at this dish and taste it … the girl’s skills are here in this dish, which she baked it by herself.”
For this reason, the dish was named literally after this tradition: “the girl is in the dish.”
According to Amt-Alrzak, this dish requires skill and experience in kneading the dough and forming its thin and smooth layers.
“Whenever the layers are ‘smooth and transparent’ inside the dish, they are evidence of the girl’s skill,” she wrote in her Facebook.
Bint al-Sahn is still a traditional standard to this day between many Yemeni families to determine girls’ cooking skills.
Conservative Yemeni society still adheres to its customs and traditions that prevent boys from mixing with girls in schools, and does not allow the boy to meet the girl during the engagement period.
The surface of the dish is usually decorated with pieces of dough, in the form of welcome words or other love messages.
Bint al-Sahn is traditionally served to the guests at the middle of the main course of the lunch, usually after the dishes of Shafoot, rice with meat, potatoes with vegetables and before the Saltah dish. However, the Yemeni new generation prefer to eat it at the end of lunch as a dessert dish.
Bashir al-Sulwi, journalist, told Xinhua that Bint al-Sahn has a special place in his heart “despite pains of war and economic blockade.” Bashir refers to the humanitarian crisis and civil war between Houthis and Saudi-led coalition forces.
“Whenever I eat Bint al-Sahn, it always reminds me an intimate message from my sweetheart,” he recalled, reports Xinhua, Sanaa.