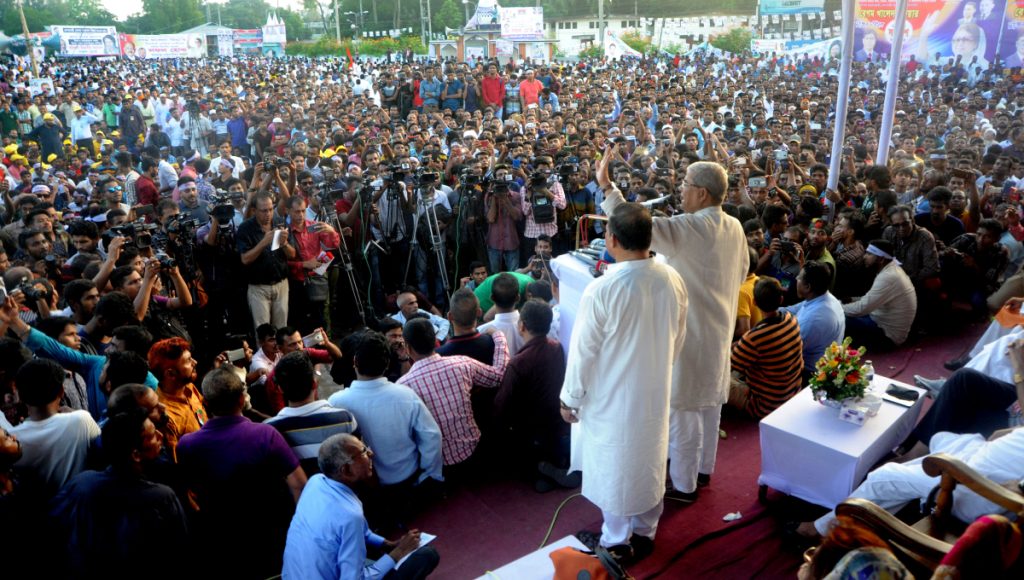 Barisal, July 18 – The BNP on Thursday slammed the government for giving state honour to autocratic ruler HM Ershad who annihilated democracy in the 90s.“We expressed shock over the death of Ershad as he was a president of a political party. But it’s fact that democracy was destroyed and many people and students were killed during his rule, and he was ousted through a mass upsurge,” said party secretary general Mirza Fakhrul Islam Alamgir.
“Awami League has now taken a stance as the opponent of people and democracy by making an alliance and compromise with them (Jatiya Party). He (Ershad) was given the state honour but the person who fought for democracy and remained captive by Pakistani Army in 1971 has been kept in jail,” he further said apparently referring to BNP chairperson Khaleda Zia.
Fakhrul came up with the comments while speaking at a public rally at Eidgah Maidan in the Barishal city arranged by BNP as part of its planned divisional programmes.
He called upon BNP leaders and activists to make a turnaround to get rid of the present situation by defeating the current regime with united efforts.
The BNP leader said Awami League has restored to ‘one-party’ Baksal role by using the state machinery snatching people’s all rights. “We must remain united and establish our rights and free our chairperson Khaleda Zia through a movement,” he told his party colleagues.
Fakhrul urged the government to try to realise people’s pulses and read the wall writings for engaging in talks with opposition parties to find out ways for resolving the political crisis through a peaceful and democratic way.
He thanked people of Barishal for making their party’s first divisional public rally a success with their spontaneous participation braving all adversities. “We initiated our fresh movement from Barishal from toady.”
The BNP leader called upon the government to immediately release Khaleda from jail.
He criticised the government for widening the areas of VAT and increasing the price of gas.
Fakhrul also said people are going through immense sufferings as prices of daily essentials, including onion and green chili, continue to rise.
He said though common people’s income are not increasing and farmers are not getting fair prices for their produces, the salaries and benefits of government officials and employees are continuously growing. “Because the government has been in power depending on them by snatching people’s all rights.”
The BNP secretary general also voiced deep concern over the sharp rise in killing, rape and other social crimes. “People are now getting killed even in the court.”
He alleged that the ruling party men are indulging in widespread corruption in the name of mega projects. “We would like to say Bangladesh will truly turn into a failed state if the current regime remains in power for a long time.”
Fakhrul also renewed his party’s demand for a fresh national election under a neutral government annulling the results of the 11th parliamentary polls.
BNP standing committee member Selima Rahman, vice-chairmen Hafizuddin Ahmed, advocate Zainul Abedin and joint secretary general Mujibur Rahman Sarwar, among others, addressed the rally. – UNB