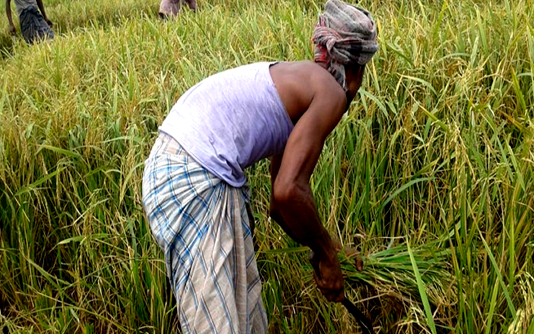 Jamalpur, June 19: The output of Boro paddy has exceeded the fixed target in the district this year, officials said.Department of Agriculture Extension (DAE) office sources said favorable weather, absence of pest attack and sufficient supply of fertilizer, pesticide, seed and other agricultural inputs enabled farmers to get bumper production.
They said farmers cultivated Boro paddy on 1, 28,860 hectares of land with a production target of 536840 tonnes of rice. But farmers got 551751 tonnes of rice which is 20311 tonnes higher than the fixed target, they added.
The officials also said this year’s production is also 11875 tonnes higher than that of last year.
This year 147560 tones of Boro rice was produced in Jamalpur Sadar, 78991 tonnes in Sarishabari, 89261.5 tonnes in Melandah, 69916 tonnes in Islampur, 39727 tonnes in Dewanganj, 71384.5 tonnes in Madarganj and 54911 tones in Bakshiganj Upazila.
The sources said farmers cultivated three varieties of Boro paddy. Of theses, high- breed variety was produced at 192016 tonnes, HYV 358804 tonnes and local variety 931 tonnes.