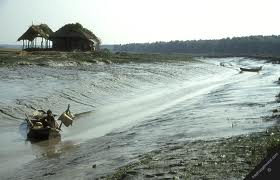 Speakers in a function here on Tuesday stressed the need for bringing
the underprivileged char dwellers under existing facilities of the
state to change their socio-economic condition.Living standard of the char people would be improved and their
development would be accelerated if the government and non-government
services are provided to them timely and properly, they said.
They made the comments while addressing a daylong advocacy seminar on
greater understanding between the government service providers and
beneficiaries at the training center of Friendship, a national NGO at
Madnerpara under Fhulchhari upazila.
Friendship organized the function under its good governance project
with the financial support of Erikshjalpen Foundation, Sweden.
The seminar was addressed, among others, by director of compliance and
legal of Friendship Barrister Ayesha Taasin Khan, programme manager
Mostafa Jamil, research officer Abu M Shihab, upazila women affairs
officer Makammam Mahmuda, Mollarchar UP chairman Saiduzzaman, char
dwellers Jahidul Islam and Champa Khatun and journalist Sarker M
Shahiduzzaman.
They also emphasized on faster socio-economic development of neglected
and backward char dwellers through active participation of all
concerned particularly the government and non-government service
providers working in the remote areas.
A large number of people including public representatives, members of
char development committee and NGO activists including journalists
took part in the seminar.
Meanwhile, cultivation of groundnut in the vast ‘Char land’ of this
district embraced by Padma, Madhumati and Kumar rivers has
substantially changed the socioeconomic life of thousands of people.
According to official sources, only a few years back the Char people
mostly affected by river erosion had to rush to towns for earnings
either as day labor or pulling rickshaws or vans now found a hope of
survival by growing groundnut without much investment and hassle.
According to some farmers who are involved with this silent economic
revolution, groundnut cultivation requires minimum investment, minimum
labor and minimum time for harvesting and marketing.
Another advantage in groundnut cultivation is that no natural
calamities except flood can damage this crop.
The farmers said it does not require any fertilizer, irrigation or
pesticide for growing the crop. After sowing the seeds , the crop
fields take roughly fifty days to yield the production, which the
farmers termed it as ‘green gold’.
A farmer Abul Sheikh told BSS that just 10 years back they lost all
hopes of survival but this ‘green gold’ has ushered in a new hope of
life. Char land, which is mostly sandy with little alluvial soil, is
not fit for any other crop except groundnut.
Moreover, the price of groundnut is increasing rapidly bringing more
profits. According to a development activist Forhad Hossain, the
people of char land are destined to struggle for survival which forced
them to diversify their crop pattern and in this case groundnut has
played a great role in crop diversification and has also changed their
lot.
An environmentalist Gazi Shahiduzzaman told that groundnut cultivation
has no adverse impact on environment rather its green plants help
maintain ecological balance in the area.
(BSS, Faridpur and Gaibandha)