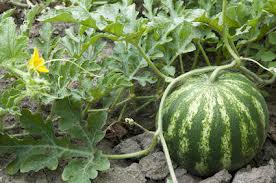 Watermelon growers of Thakurgaon district have achieved a bumper production and are getting fair price of the fruit this year.
Favourable weather and absence of virus attack helped the growers achieve the feat this season. The district Agricultural Extension Department (AED) sources said, about 500 hectares of land has been brought under watermelon cultivation in the district.
Highest quantity of watermelon grew in Pirganj upazila of the district. About 250 hectares of land has been brought under watermelon
cultivation in the upazila out of 500 hectares of land of the district. Sources said, the growers spent Tk 25,000 to Tk 35,000
per acre of land and earned up to Tk 1.50 lakh. Watermelon grower Atikuzzama of Pirganj upazila told that with the help of quality seeds and proper
advice from AED, he was able to achieve a bumper production. Deputy Director of AED, Md Belayet Hossein said, about 25 to 30 tons of watermelon grew per hectare of
land this season in the district.
When this correspondent visited some watermelon fields in Pirganj upazila, he found that buyers from different districts like Dhaka, Chittagaon,
Khulna, Jessore and Kushtia were buying watermelon from the fields directly.
(Our Correspondent)