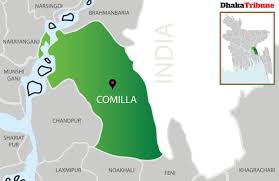 Cumilla, Mar 12:  Police have accused two men, including a driver, for negligence over Thursday’s Cumilla bus fire in which two people were killed and 18 others injured.
A Matlab-bound bus caught fire on Dhaka-Chattogram Highway in Cumilla’s Daudkandi in the evening.
The injured passengers are undergoing treatment at the burn unit of Dhaka Medical College Hospital.
The case was filed against the driver and another person on charge of negligence which caused the death of two persons, Officer-in-Charge of Daudkandi Police Station Jahirul Islam said Friday.
Police say they primarily suspected that a gas cylinder leakage caused the fire but the actual reason will be known after an investigation.
The bodies of the victims – Shafin and Rafiqul Islam— would be handed over to their families after autopsy at Cumilla Medical College Hospital, he said, reports UNB.