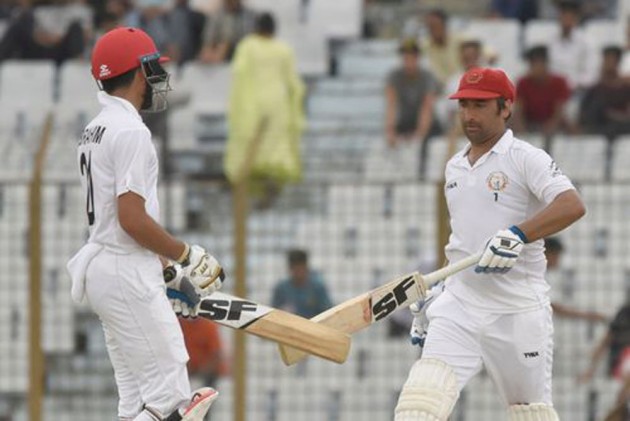 Chattogram – Test babes Afghanistan have created history defeating hosts and experienced Bangladesh by huge 224 runs on the 5th and final day of the rain-interrupted one-off Test at Zahur Ahmed Chowdhury Stadium in Chattogram on Monday.

Afghanistan captain Rashid Khan picked up 11 wickets on his debut as the captain to lead the team from the front, and eventually, he was adjudged man of the match.

The play of the fifth day was interrupted more than once by rain after the first session was completely washed. However, in the final 70 minutes of the game, Afghanistan needed four wickets to create history. Bangladesh, on the other hand, needed to survive a minimum 19 overs to end the game on a draw.

However, Afghanistan used a small window to make a big history. Rashid bagged the three of last four wickets of Bangladesh to seal the victory in their favour.

Before taking six for 49 in the second innings, Rashid took five for 55 and hit 51 in Afghanistan’s first innings. And with this, he joined Imran Khan and Allan Border to have taken 10-plus wickets and hit fifty-plus score in a single Test match as captains.

In the end, it was Rashid Khan’s Test as he scalped the wicket of Soumya Sarkar who was the last obstacle between Afghanistan and their first away Test win.

Soumya, the left-handed batsman who came to bat at number eight in the last innings of Chattogram Test, tried his best to save the game facing 59 deliveries to score 15. But in the end, he failed to finish it out.

Soumya looked to defend the ball but he prodded a catch to the fielder to the short leg — Ibrahim Zadran — who took an easy catch to end the game. Before Soumya’s dismissal, Bangladesh lost Taijul Islam to an erroneous decision of umpire Paul Wilson who declared Taijul lbw although the ball touched his bat before pinning on the pad.

Earlier, in the first innings, Afghanistan posted 342 runs — their highest Test total — riding on the maiden Test ton by Rahmat Shah and 92 of Asghar Afghan.

Replying to this innings, Bangladesh were all-out for 205, which was the main reason behind Bangladesh’s downfall in this Test.

Afghanistan had ensured a 137-run lead at the end of first innings of both sides.

In the second innings, they put up 260 runs on the board with the help of the fifties for Ibrahim Zadran and Asghar.

They stretched their lead to a massive 397 runs. Bangladesh had never chased this sort of tall totals in the last innings of a Test match.

Bangladesh tumbled for 173 all-out in 61.4 over in their last innings to suffer their most painful Test defeat.

In both of the innings, Bangladeshi batsmen failed to come up with an effective plan to face the spin-attack of Afghanistan. At the same time, some of them disappointed to show patience and calmness what was most important to avoid this humiliating defeat.

Afghanistan are now the only team after Australia to have registered two Test wins just playing only three. In contrast, Bangladesh had to play 60 Tests to win two Tests.