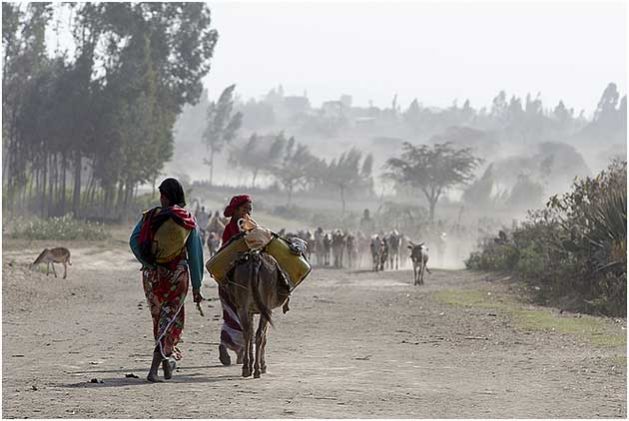 The unusually hot summer of 2018 showed that climate change affects a central part of our lives: agriculture. The severe drought in Liechtenstein led to large losses in the hay harvest.
In countries of the Global South, the consequences of climate change are already much more drastic. In Africa, for example, extreme weather conditions threaten food security for millions of people.East Africa has encountered droughts at increasingly shorter intervals in recent years, most recently in 2005-6, 2009, 2011, 2014-15, and 2017.
Apart from drought, the conditions for agriculture are also becoming increasingly difficult due to the gradual rise in temperature, salinization and changing rainy seasons.Serious consequences include decreasing availability of food and increasing conflicts over water–both obstacles to development opportunities of the affected states and possible triggers for migration.
Agriculture is also the cause
Agriculture and the food system are not only victims but also causes of climate change. The term “food system” refers to the entire food cycle, from production to harvesting, storage, distribution, consumption, and disposal.
This cycle produces significant amounts of greenhouse gas emissions. Paradoxically, modern industrial agriculture aims to intensify operations to compensate for the loss of production caused by climate change.
However, using ever more fossil fuels, synthetic fertilizers, and agrochemicals increases emissions of climate-damaging gases instead of reducing them. Industrialized agriculture causes additional problems as well, including large-scale deforestation, immense water consumption, soil compaction and erosion, chemical pollution of the environment, and biodiversity loss.
This exacerbates the over exploitation of natural resources and increases climate change vulnerability.
Carrying on like in the past is no longer an option
“Industrial agriculture has reached a dead end—there is no option to continue as before,” warns Hans Rudolf Herren, winner of the World Food Prize and longtime president of the Biovision Foundation.
The renowned agronomist and entomologist urges global agriculture to embrace organic, multifunctional, healthy and sustainable practices that take agroecological principles into account, rather than striving for the highest possible yields.
This option is now also recognized by the UN Food and Agriculture Organization (FAO) as a response to the many challenges of climate change.
Diversity increases resilience
Climate change is a complex problem involving various factors. This calls for holistic solutions. These include agroecology adapted to the local political, social, and natural conditions.
An important principle of agroecology is the promotion of diversity. The more diverse an ecosystem is, the more flexible it can react to changes, recover from disturbances, and adapt to new conditions.Diversified agroecosystems use synergies from mixed cultivation or agroforestry systems and rely on natural fertilizers from compost and manure.
Agroecology combines traditional and new knowledge. This includes locally adapted and robust plant varieties and animal breeds. Efficiency-enhancing measures, such as irrigation systems, are becoming increasingly important.At the societal level, fair trade conditions and market access for all producers are important, as is responsible governance. The latter is necessary to coordinate and issue appropriate political policies.
Acting at all levels
A breakthrough for agroecology principles will require dialogue between all actors involved. Only then can the course of agriculture change towards a joint sustainable future.
This is the aim of the Biovision Foundation’s advocacy team. Together with an alliance of goal-oriented organizations and states, these agroecology advocates succeeded in establishing the demand for sustainable agriculture as part of the UN’s 17 sustainability goals in New York in 2015.
The Biovision Foundation supports the achievement of these goals both for agriculture and for climate protection at three levels:
Here at Biovision, we focus on raising public awareness for sustainable consumption and on establishing a network to implement sustainability goals.
At the international level, the advocacy team discusses agroecology with interested country representatives to position agroecology principles in the UN Framework Convention on Climate Change.
In the project “Advocacy for Agroecology,” Biovision supports countries with concrete recommendations for action and a coordinated policy dialogue to plan climate-friendly agroecological measures.
Through various grassroots projects in Africa, Biovision has demonstrated various concrete examples of successful application of these measures. LED’s support to train and inform smallholders is of crucial importance for farmers to have the ability to prepare themselves for the consequences of climate change.

This article was first published in “Blickwechsel”, the magazine of the Liechtenstein Development Service LED and is written by Peter Lüthi. He is in Communications at the Biovision Foundation for Ecological Development, Zurich.