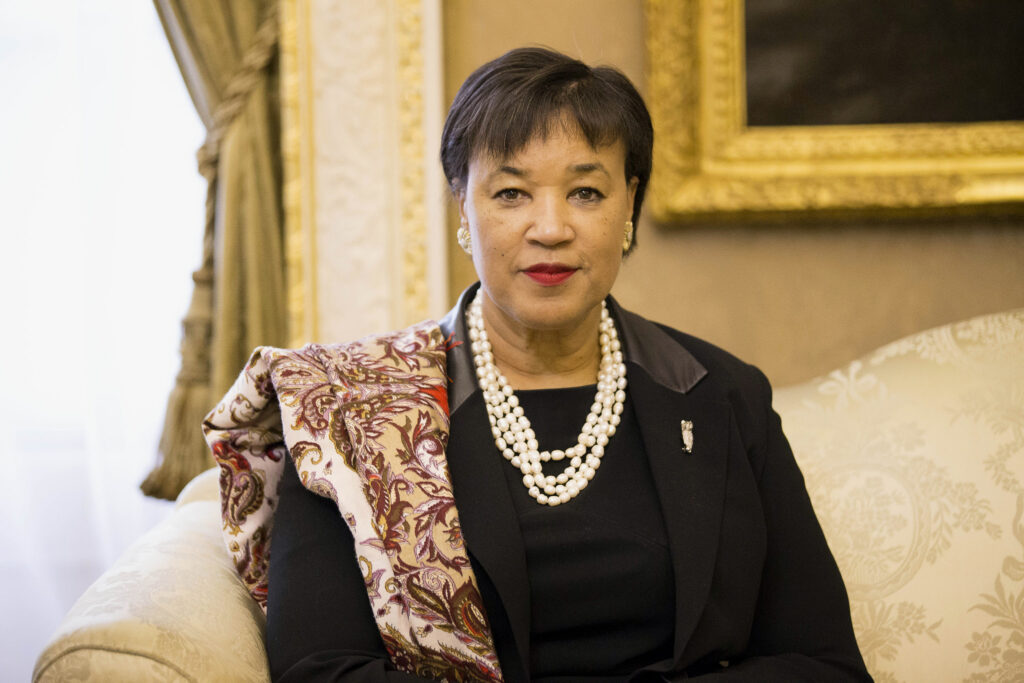 By Patricia Scotland, Commonwealth Secretary-General
7 October 2019 – Global uncertainties and tensions are escalating and affecting trade in every region. We see rising protectionism, while multilateral cooperation – including through the World Trade Organisation – is increasingly under threat. Meanwhile, the resilience of many smaller or less developed countries is being undermined by the impact of climate change and extreme weather unprecedented in living memory, together with other natural disasters.These factors combine to make the general outlook for economic growth and prosperity sombre. Yet through the encompassing gloom, Commonwealth connection and cooperation shine as beacons of hope guiding towards safer and saner waters.
This year, world GDP is projected to grow 2.6 per cent, down from 2.9 per cent last year, while world merchandise trade volumes are now expected to rise by only 1.2 per cent in 2019 – the weakest growth since the global financial crisis. Our citizens experience the effects of these trends in their day-to-day lives as the prices of food, fuel and basic services rise, jobs become harder to find, and there is reduced potential for businesses to grow.
Against this backdrop, this week in London the UK will chair a meeting of trade ministers from the 53 countries of the Commonwealth. Building on the distinctive nature of Commonwealth connection and cooperation, ministers will consider approaches for tackling pressures on international trade, and for making even more of the Commonwealth Advantage enjoyed among our member countries.
Most importantly, ministers will review progress towards the target agreed by Heads of Government at CHOGM 2018 for annual trade within the Commonwealth to be worth at least $2 trillion by 2030 – a goal closely linked to achieving the UN Sustainable Development Goals.
The challenges may seem daunting, but our governments know that through coordination and with the right policies in place the prizes can be brought within reach. Collective strategic action can unlock promising opportunities for all members of our diverse and geographically widespread family of 53 Commonwealth countries.
Our studies have shown that on average the nations of the Commonwealth countries tend to trade 20 per cent more with each other than with non-Commonwealth countries. This very real and valuable tendency is an important factor in Commonwealth Advantage. It is the product of historical ties, shared language, and similar legislative, governance and administrative systems based on the common law. As a result, trade costs are on average 19 per cent lower between Commonwealth country pairs than comparable non-Commonwealth counterparts, and our member states also invest on average 10 per cent more in each other than they do in non-members.
These benefits are now further bolstered by our Commonwealth Connectivity Agenda, which provides powerful mechanisms for structured dialogue, sharing of best practices, networking and collaboration on trade and investment among our member countries. Intra-Commonwealth trade in goods has increased by around $100 billion over the past three years, reaching almost $450 billion in 2018. With rapid population and per capita income growth in developing countries, especially in Asia, trade in goods and services is expected to reach the $700 billion mark by 2020. With more than 60 per cent of the combined Commonwealth population of 2.4 billion under the age of 30, these drivers of growth and prosperity are unlikely to slow for some very considerable time.
The digital economy holds further untapped opportunities, with the number of internet users globally trebling over the past decade. Yet in low-income Commonwealth countries only 18 per cent of the population currently have internet access, compared with 85 per cent in high-income countries. So the economic case for tackling the digital divide is persuasive: full access to broadband internet could add up to $1 trillion to combined Commonwealth GDP.
Certainly, with 49 of our members belonging to the WTO, the Commonwealth can play an increasingly strategic role as a champion of free trade, advocating for a transparent, inclusive, fair and open rules-based multilateral trading system. Commonwealth discussions provide space for broader wide-ranging dialogue in the spirit of goodwill and an atmosphere of trust rather than treaty. This means deadlocks are less likely to hinder pragmatic progress towards practical solutions. Our member countries gain advantage through cooperation and coordinated action, and remain free to move forward with their preferred domestic reforms unfettered by obligations, deadlines or legally binding commitments.
It is within this context that we can look forward to Commonwealth trade ministers, when they meet this week, offering powerful messages which, while rooted in reality and notwithstanding the diverse economic interests represented, proffer the prospect of progress towards hope and harmony within a broad unity of purpose. For while the global trading system may be far from perfect, it is the most potent pathway towards eradicating poverty. That is a prize not be lost. By enhancing opportunities for enterprise and investment among all our member nations, and by working together for the common good, we shall truly live up to the ambition and aspiration of being a Commonwealth.