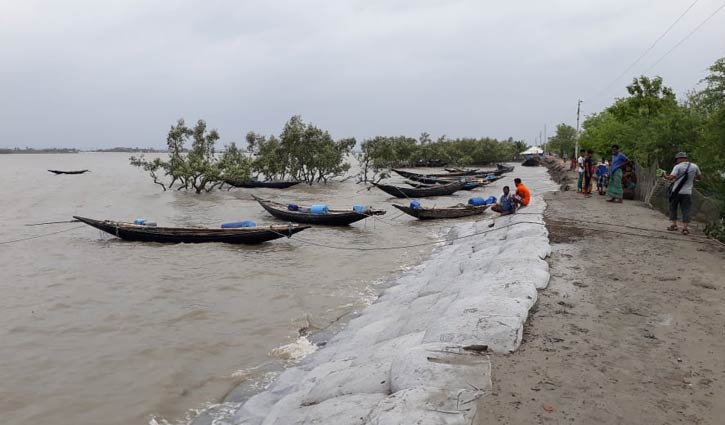 Khulna, May 26 : Low-lying areas in Koyra, Dakope and Paikgachcha upazilas in Khulna district have been inundated by the tidal surge triggered by Cyclone Yaas which made a landfall in eastern India on Wednesday.Residents of the three upazilas have been experiencing light rain or drizzles since Wednesday noon and the local administration has opened over 1000 cyclone shelters.
Besides, volunteers, Red Crescent workers and members of law enforcement agencies are working to tackle the situation and ensure safety of the people living in coastal area of the country.
Senior Meteorologist of Khulna regional Met Office Amirul Azad said low-lying areas are likely to be indeed by 3/ 4 feet high tidal surge due to the full moon phase and cyclone Yaas.
The local Met office recorded 21 mm of rainfall in the past two days in the district .
Mohammad Azizul Haque Zoardar, district relief and rehabilitation officer, said 1048 cyclone shelters have been kept ready in nine upazilas of the district.
Besides, there are 724 school, colleges and madrashas will be turned into shelter centres with capacity of accommodating 4 lakh people.
Besides, 116 medical teams are working, he said.
Executive Engineer of Satkhira Water Development Board-2, Rashidur Rahman, said 24 points of 155 long kilometer embankment in Koyra upazila of the district has been identified as risky.
Already the authorities concerned are conducting repair work.
But if the tidal surges go up to 8-10 feet above the normal astronomical tide, then it will be difficult to save the embankment.
Koyra Upazila UNO Animesh Biswash said there are 118 cyclone shelters in the upazila and 65000-70000 people can stay there.
ABM Khalid Hossain Siddique, UNO of Paikgachcha upazila, said a total of 108 shelters with capacity of accommodating 59,000 people have been prepared and 3000 volunteers are ready to provide all-out support.
Besides, 11 medical teams are ready to provide treatment.
Khulna Police Super Mahbub Hasan, said a committee has been formed in each ward to tackle pre and post cyclone situation.