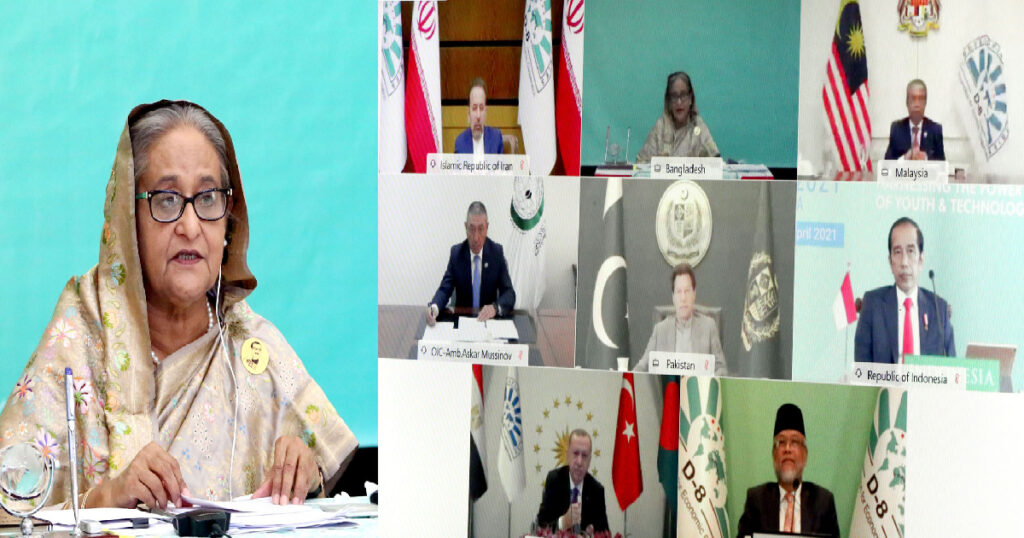 Dhaka, Apr 8 – Prime Minister Sheikh Hasina on Thursday said it is now more important than ever to work together for building a better future.“… the world is now passing through a critical period. The Covid-19 pandemic has created havoc on the global economy. It’s now more important than ever to work unitedly for building back better [future],” she said while delivering her closing remarks at the 10th D-8 virtual Summit as the new D-8 Chair.
Bangladesh hosted the summit virtually participated by leaders of Egypt, Indonesia, Iran, Malaysia, Nigeria, Pakistan and Turkey.
Turkish President Recep Tayyip Erdogan delivered the opening remarks as the current Chair of D-8 and handed over the D-8 Chairmanship to Bangladesh Prime Minister Sheikh Hasina.
Sheikh Hasina, a founding member of the organisation, has taken over the charge as the D-8 Chair for the next two years for the second time.
Sheikh Hasina said hearing statements and suggestions from the D-8 leaders she felt hopeful and confident that working together, the D-8 can create a better tomorrow for the one billion-plus people in the Member States.
“New solutions were encouraged. New ways were explored to transform societies and economies by optimally using the demographic dividend and the 4th industrial revolution,” she said.
This is the first time D-8 held the Youth Summit, she said, adding, “Let’s take the benefit of the demographic dividend that we as a Group are enjoying now.”
The Prime Minister said the private sectors of the D-8 countries will have more productive, mutually beneficial interaction and cooperation.
During the summit several different initiatives of the D-8, covering wide ranging issues like technology, agriculture, business, health and education, have been mentioned, she said.
“I’m confident that with our support and encouragement, the D-8 will flourish further in the coming days, and we’ll be able to achieve even more,” Hasina added.
At this juncture of time, she said, “Let’s transform the D-8 into a more dynamic, more visionary, more forward-looking Group. Let us take the D-8 to newer heights, let’s work for closer economic and social ties. Let’s work together to achieve our common vision of achieving peace and prosperity for our peoples.”
President of Indonesia Joko Widodo, President of Iran Hassan Rouhani, Prime Minister of Malaysia Tan Sri Muhyiddin Yassin, Prime Minister of Pakistan Imran Khan, Prime Minister of Egypt Mostafa Madbouly and Foreign Minister of Nigeria Geoffrey Jideofor Kwusike Onyeama on behalf of its President Muhammadu Buhari addressed the summit.
At the summit, Dhaka Declaration 2021 and D-8 Decennial Roadmap for 2020-2030 were adopted.
Sheikh Hasina attended the first D-8 summit held in 1997 in Istanbul, Turkey and chaired the 2nd D-8 summit hosted by Dhaka in 1999.- UNB