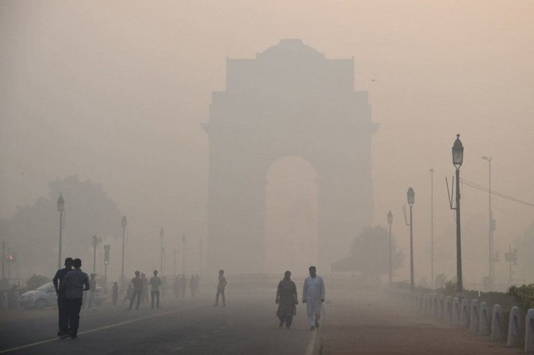 New Delhi suffered a rare summer air pollution alert Monday as dust storms and heat over northern India took smog to hazardous levels.
The world’s most polluted capital city is blanketed in a toxic smog of car fumes, agricultural smoke and factory waste most winters, but it is less severe in summer months.
On Monday, the Indian government’s air quality index hit “very poor” with PM 2.5 particles, the most harmful, at 154 micrograms per cubic metre, five
times the normal safe level.
Clouds of dust swirled around the streets and many people brought out masks generally used in winter.
“Right now we are in the thunderstorm season. High speed winds are raising a lot of dust but we think it is only transient and will change in a day or two, when it rains,” V.K Soni, an India Meteorological Department official, told AFP.
Pollution levels started rising the day after a top minister promised that Delhi’s air would be clean in three years because of action taken by the
government.
“Our government has done 100 per cent corruption-free, transparent, time-bound, result-oriented and quality work and that is why Delhi will be free of air and water pollution in the next three years,” Transport and Water Resources Minister Nitin Gadkari told an election-campaign press conference
last Thursday.
Indian authorities have unsuccessfully tried to curb pollution in recent years.
Indian cities made up 14 of the world’s 15 most polluted cities in a UN survey released in 2018. Air pollution contributes to hundreds of thousands
of premature deaths each year in India, according to the United Nations.
The Delhi region has been described as a “gas chamber” by the state’s incumbent chief minister, Arvind Kejriwal, reports AFP, New Delhi.