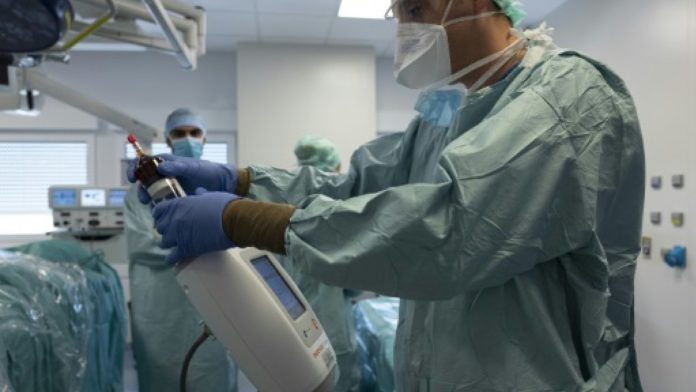 Ashley Sumrall was an early career brain oncologist when she got a case that would stay with her for the rest of her career.
Losing a patient is far from rare in her field: 90 percent of the people she sees will go on to die as a result of their illness.
But David was different. A former White House aide, he had come into her care after years of experimental trials failed to halt the advance of his glioma.
She believed he would be a difficult case because of his initial refusal to accept muscle-destroying steroids but over time she became so involved in his care that losing him was akin to losing a member of her own family.
“It sounds cliched, but it’s truly a disease that affects their whole family. So you’re caring for the individual and their spouse or caregiver, their adult children, you know, you’re connected to that whole family,” the assistant professor at the Levine Cancer Institute in North Carolina told AFP.
Cancer is a devastating diagnosis for the patient and their loved ones, but an under-examined area is its impact for those involved in its care, who are at higher risk for anxiety, depression and burnout.
A report last year by the American Psychiatric Association found that a doctor commits suicide every day in the US, the highest rate of any profession — 28 to 40 per 100,000, which is more than twice the rate for the general population.
“We know that physicians in general don’t ask for help for their mental and physical health as soon as others,” said Bill Eley, an oncologist and associate dean of the Emory University School of Medicine in Atlanta, Georgia.
“For oncologists, people die, and you walk with them through that. And we’re ill prepared for the stress that’s physical, emotional and spiritual, that we undergo.”
Burnout and the ever present pressure of showing value — the US hospital system measures how busy doctors are, but doesn’t account for how valued they are by patients — are factors most commonly quoted by professionals who study the problem.
But the stressors are even more intense for oncologists for several reasons, explained Michelle Riba, a psychologist and director of the PsychOncology Program at the University of Michigan Rogel Cancer Center.
“We have long relationships, we often hold the key to their survival. There’s no room for errors, it’s a pressure cooker,” she said.
Eley agreed: “We see tragedy after tragedy. And we go see the next patient. And we go see the next patient. And there’s very little attention to processing grief and sadness and suffering in our systems.”
Beyond that is the amount of suffering patients undergo in the cancer treatments prescribed by their doctors, including the most dreaded chemotherapy and all the destructive side effects it brings.
One case that Eley recalls vividly was a 28-year-old woman who had a rare cancer called sarcoma. The treatment left her unable to swallow and she was left drooling, “which just makes it all the more painful.”
And although cancer treatments today are more advanced and life-prolonging than ever before, that too, paradoxically, brings its own challenges, adds Eley.
“Thankfully we have longer and longer relationships with our patients. And I think when you have relationships with people, and you lose them, they die, you are sad, and you suffer.”
At one point early on in his career, Eley lost interest in the things in life that gave him joy, such as dancing.
“I did come become numb for a number of years, where I did not feel much,” he said.
“But I came through it, because a great colleague, who helped me and mentored me that I gained an outlook on life that we can start again.
The antidote, he said, was forming strong relationships with colleagues, mentors, patients and their families.
For Sumrall, David’s case was a reminder that the work she does is about more than just “giving chemo.”
“I let my boundaries down in a way that I had not done in years. His kids were similar to mine in age, and I adored the patient and his wife,” she said, adding she was still in touch. “It could be easy to ‘give up’ after experiencing loss in such a way.
“In fact, my team probably loses 50 patients per year. For us, we view those opportunities as a chance to help others gently transition to their next phase, and the pain we feel is miniscule compared to theirs,” reports AFP, Washington.