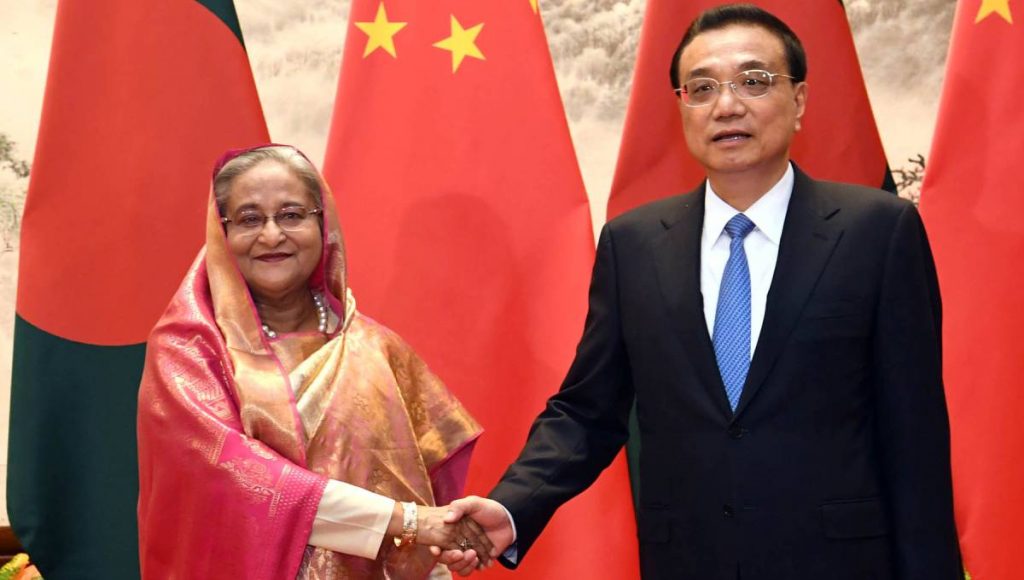 Beijing, Jul 4 – Bangladesh and China on Thursday signed nine instruments for further strengthening cooperation on power, water resources, culture tourism sectors as well as providing 2,500 metric tonnes of rice for the displaced Rohingyas.
The instruments, including two loan deals, were signed in presence of Bangladesh Prime Minister Sheikh Hasina and Chinese Prime Minister Li Keqiang after a bilateral meeting between the two leaders at the Great Hall of the People in Beijing, the capital of China.
Of the instruments, signed between the Economic Relations Division of Bangladesh and the Ministry of Commerce of China, Foreign Secretary Md Shahidul Haque told reporters.
The four instruments are Framework Agreement of Expansion and Strengthening of Power System Network under DPDC Area; Framework Agreement of Power Grid Network Strengthening Project under PGCB Project; Agreement on Economic and Technical Cooperation between the two governments; and Memorandum of Understanding on the Investment Cooperation Working Group.
The ERD also inked two loan agreements with the Export-Import Bank of China.
The two agreements are Government Concessional Loan Agreement of Expansion and Strengthening of Power System Network under DPDC Area Project; and Preferential Buyer’s Credit Loan Agreement of Expansion and Strengthening of Power System Network under DPDC Area Project.
Besides, a Memorandum of Understanding (MoU) and its Implementation Hydrological Yaluzhangbu/Brahmaputra River was signed between Ministry of Water Resources of Bangladesh and Ministry of Water Resources of China.
Another MoU on Cultural and Tourism Exchange Programme was signed by of Culture of China and of Cultural Affairs of Bangladesh.
The remaining instrument is Letter of Exchange (LOE) on the Rohingya Refugees Rice Aid, which was signed the Disaster Management and Relief Ministry of Bangladesh and China International Development Cooperation Agency (CIDCA).
Under the LoE, China will provide 2,500 metric tonnes of rice as assistance for the displaced Rohingya people who have taken shelter in Bangladesh.
On behalf of Bangladesh side, ERD Secretary Monwar Ahmed signed most of the instruments, while Water Resources Secretary Kabir bin Anwar and Cultural Affairs Secretary Md Abu Jena Mostafa Kamal inked one instrument each. – UNB