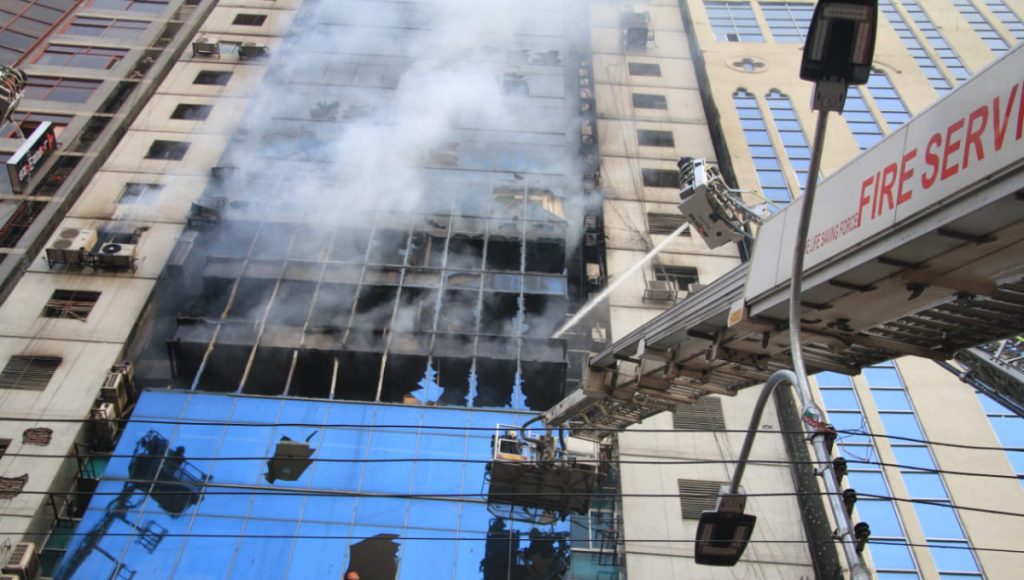 Dhaka, March 31 –The FR Tower, where a deadly blaze on last Thursday killed 26 people, is declared as “unusable until further notice” by a government probe committee as not only the building is badly fire-gutted but also has evinced structural faults.
Experts of Rajdhani Unnayan Kartripakkha (RAJUK) yesterday said that FR Tower cannot be used before renovation as the building was badly damaged by the fire.
According to the building and fire safety codes, the building cannot be used before the renovation, said Prof MA Ansari of the civil engineering department of Bangladesh University Engineering Technology (BUET) who is leading a six-member team of RAJUK.
Three days after the fire, a six-member investigation team of RAJUK visited the spot. The BUET and City Corporation representatives were also in the investigation team. They looked around the floors of the
building.
“Today, we have inspected the entire building. We will present a detailed engineering assessment within five months,” said Prof MA Ansari.
“It takes 150 days to complete the investigation. Before the building can be used – we cannot say before the investigation,” he said.
The renovation will take at least three months as several columns and slabs have been damaged, MA Ansari told reporters.
Professor Ansari said that as far as we can imagine, the fire started from the south-west side of the eighth floor, and later spread it.
Building slabs and beam are cracked and it is risky. “The building was built in violation of building code and the design submitted to the RAJUK. The building is riskier as it was built up to 22-storey instead of approved 18,” said Shamsuddin Ahmed Chowdhury, a former officer of RAJUK and investigation team member.
Mentioning that there was no fire safety measure in the building, he said the committee will submit a primary report within two to three days.
Meanwhile, the investigation committee of Home Ministry and Ministry of Disaster Management and Relief believed that the fire triggered from electric short circuits on the eight floors of the 22-story building of Banani FR Tower.
Additional secretary of the Ministry of Disaster Management and Relief Md. Faizur Rahman who led the nine members committee told this to the reporters after a public hearing at the temporary control room of Banani Police near the accident place on yesterday.
Twenty four people who work on this building have shared their experience the investigation committee. The public hearing took place in the morning of and started till 12 noon. The
investigation committee members initially reviewed the statement that the fire started from the eighth floor.
However, the officials who worked the eighth floor denied this and said about different source might be the cause of .
Md. Kafil Uddin, Assistant Director of Spectra Baying on floor said that there was no fire on their floor. They saw the flames of fire spread from above.
The committee will submit the investigation report on April 3, on the basis of all the evidence of the 24 witnesses and the injured in the hospital.
The probe teams took the testimony of 24 survivors, who were on the eighth, ninth and tenth floors of the building.
Earlier the day survivors of the FR tower fire tragedy recalled those moments of horror and their desperate attempt to make it out of the building.
Shafiqul Islam, a senior manager of Aamra Technologies which was housed on the ninth floor of the building and another survivor Salahuddin, an employee of Kashem Group told their horror experiences
to the committee.
Shafiqul said that at least 24 people including him managed to get out through a bathroom window and passed to adjoining building ‘Ahmed Tower’ and saved themselves.
Salahuddin said around 200 people escaped through rooftop and jumped Ahmed Tower to save. One of his colleagues died and four others hurt.
Faizur Rahman said, “The main purpose of the public hearing is to know about the beginning of the fire and to arrange such a suggestion in future that we can pass. Our investigation committee started work on from Friday. The testimony of a public hearing is a part of the investigation. ‘
He also said, ‘We have heard the land owner’s statement. He submitted the necessary documents. Besides, those who have done the construction of this building have not yet provided any documents. I have given time to submit their papers. ‘
Faizur Rahman said that those who have been admitted in Dhaka Medical College (DMCH) Hospital and Kurmitola General Hospital, we have been talking to them about this incident.
In response to journalists’ questions, he said that the fire extinguishing system that usually needs such a multi-storied building is not there properly. There were no fire alarms in the building during the fire. – Staff Reporter