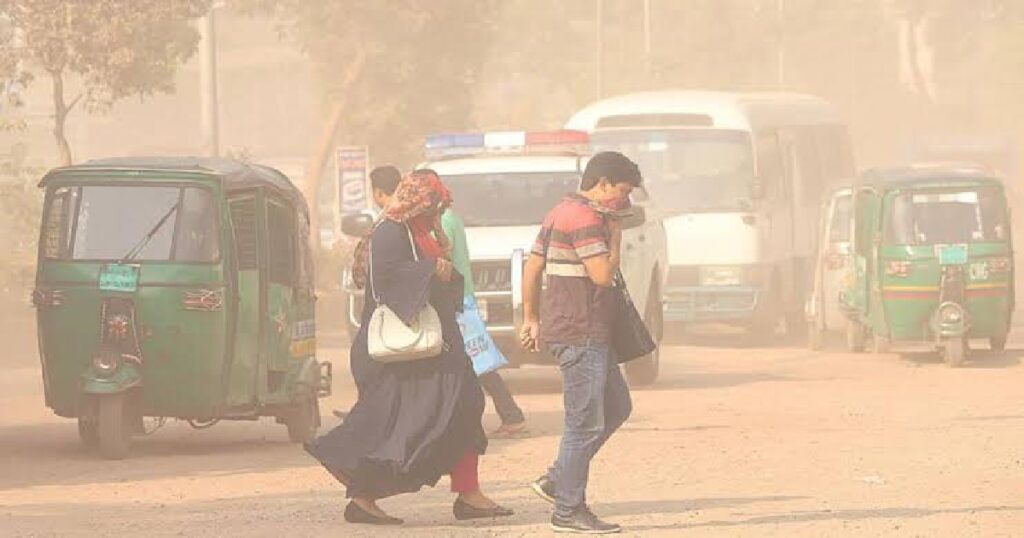 Dhaka, Mar 5 (UNB) : Dhaka may no longer be the world’s most polluted city, but the densely populated capital’s air quality still remains ‘unhealthy’.On Friday, Dhaka occupied the fifth position in the list of world cities with the worst air quality. The capital’s air quality index (AQI) was recorded at 171 around 11.40 am.
The city of Karachi in Pakistan occupied the first place, while the second and third spots were grabbed by Beijing of China and Lahore of Pakistan, respectively.
An AQI between 101 and 200 is considered ‘unhealthy’, particularly for sensitive groups. Similarly, an AQI between 201 and 300 is said to be ‘poor’, while a reading of 301 to 400 is considered ‘hazardous’, posing serious health risks to residents.
AQI, an index for reporting daily air quality, is used by government agencies to inform people how clean or polluted the air of a certain city is, and what associated health effects might be a concern for them.
In Bangladesh, the overall AQI is based on five criteria pollutants – Particulate Matter (PM10 and PM2.5), NO2, CO, SO2, and Ozone (O3).
Bangladesh has a subtropical monsoon climate characterised by wide seasonal variations in rainfall, high temperatures and humidity. Generally, Dhaka’s air starts getting fresh when monsoon rains begin in mid-June. The air remains mostly acceptable from June to October.
Air pollution consistently ranks among the top risk factors for death and disability worldwide. Breathing polluted air has long been recognised as increasing a person’s chances of developing heart disease, chronic respiratory diseases, lung infections, and cancer, according to several studies.
As per the World Health Organization (WHO), air pollution kills an estimated seven million people worldwide every year, largely as a result of increased mortality from stroke, heart disease, chronic obstructive pulmonary disease, lung cancer and acute respiratory infections.
Over 80 percent living in urban areas, which monitor air pollution, are exposed to air quality levels that exceed WHO guideline limits, with low- and middle-income countries most at risk.