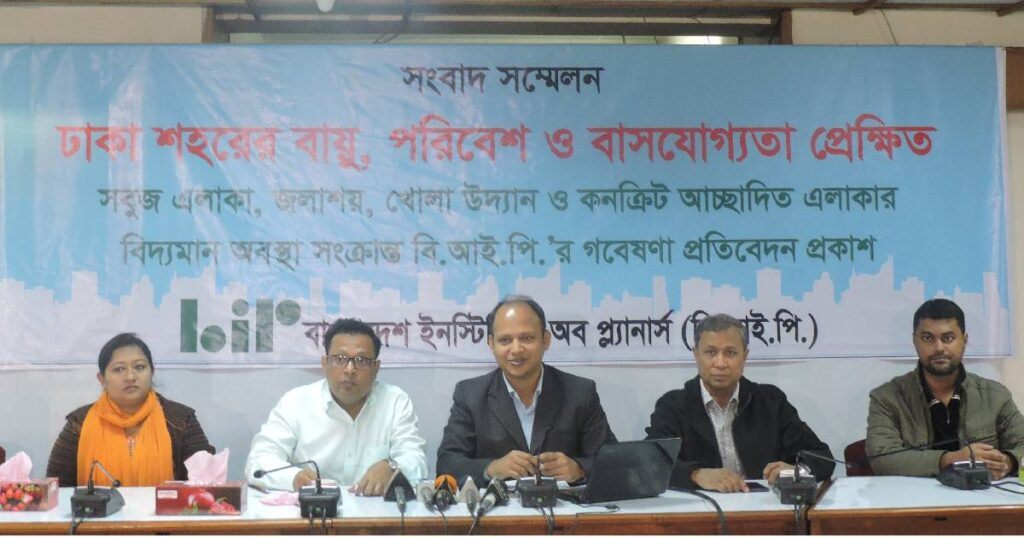 Dhaka, Jan 04 – Wetlands in the capital city of Dhaka declined to 4.38 percent from 14.25 percent in the last 20 years due to unplanned urbanisation, finds a new study. According to findings of the study carried out by Bangladesh Institute of Planners (BIP), the greeneries in the city came down to 9.20 percent from 6.69 percent while open space to 4.61 percent from 14.07 percent in 2019 compared to 1999.
On the contrary, areas covered by concrete shot up to 81.82 percent from 64.99 percent during the period, it said.
BIP General Secretary Dr Adil Mohammed Khan presented the study findings at a press conference titled ‘Air, environment and livability of Dhaka city: State of green, water, open space and concrete cover’ at its conference hall in the city.
He said although an ideal city must have 10-15 percent wetlands, those have now shrunk to only 4.38 percent in Dhaka which is a matter of concern.
In contrast, concrete-covered areas are on the rise, Adil said, adding that the viability of a city depends on environmental management.
He underscored the need for striking a balance among greeneries, water reservoirs and built-up areas.
The BIP general secretary also put forward 10 recommendations to overcome the situation.
The suggestions include developing area-based green areas; erecting green belts around the city; preserving existing water reservoirs and reclaiming occupied ones; ensuring urban forestation; formulating necessary laws and policies for not expanding the built-up area of the city; and reviewing environmental, social and other impacts before making infrastructure plans.
BIP President Dr Akhter Mahmud presided over the function while its Vice-presidents Muhammad Ariful Islam, Dr Chowdhury Md Zabed Sadek, former President Prof Dr AKM Abul Kalam and former Vice-president Mohammad Fazle Reza Sumon were present. -UNB