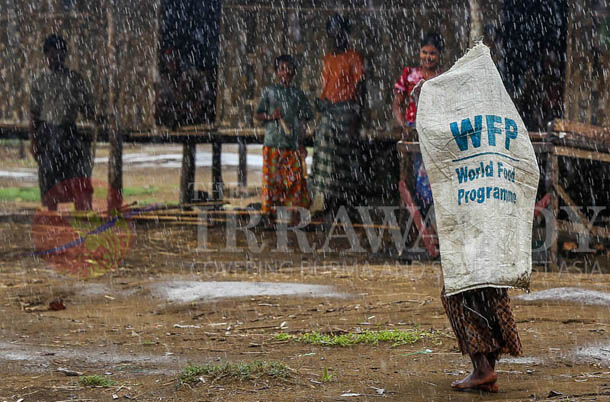 SITTWE, Arakan State—A potential humanitarian disaster is looming in western Burma’s Arakan State after thousands of internally displaced Rohingya Muslims on Wednesday failed to agree to a government plan to evacuate them ahead of an approaching tropical storm.Some 70,000 Rohingyas are living in makeshift camps in low-lying paddy fields on the Arakan coast that could be flooded when the storm hits on Thursday night, according to UN estimates.
The Rohingyas, located at sites near the Arakan State capital Sittwe, turned down a plan by local authorities to move all of them to a military-controlled site.
State authorities said they had been working with UN officials to preemptively move the internally displaced persons (IDP) camps to higher ground, but on Wednesday afternoon none of the Rohingyas had been resettled.
Arakan State government spokesperson Hla Thein said local authorities had tried to persuade the IDPs to move to a huge military base near Sittwe, but they had declined to cooperate.
“In the Sittwe area, we have 13 IDP camps, 11 are Bengali camps—these refused to move. The Rakhine camps were moved to [Buddhist] monasteries in Sittwe town,” Hla Thein told reporters. “The UN and INGOs… are trying to negotiate with the Bengalis and the government,” he added.
Burma’s government does not recognize the citizenship claims of the Rohingyas, who number around 800,000 people. It terms them “Bengalis” and has suggested that they are immigrants from Bangladesh.
Hla Thein went on to claim that “Muslim organizations in Rangoon and abroad” had instructed the Rohingya IDPs to stay in the vulnerable camps despite the storm.
Cyclone Mahasen is moving through the Bay of Bengal and heading towards the coast of Bangladesh. It will create severe storm conditions on the Arakan coast. Hla Thein said that 4-meter (12-foot) high waves were being expected near Sittwe, while a storm surge could flow up to 1 mile inland.
Rohingyas living in three IDP camps in a coastal zone east of Sittwe said they refused to be evacuated as they feared the Burmese military and armed police units that would be responsible for transporting them.
“I am scared; I don’t want follow the army to the base. I don’t believe their promises,” said Mamut Shafi, who stays at Dar Phim, an unofficial camp where some 188 families live. The cluster of rickety bamboo and plastic tarpaulin huts is located on a muddy, low-lying paddy field, less than 1 kilometer from the coast.
Maung Maung, a leader of Te Chaung, a camp located a few kilometers outside of Sittwe, said the Rohingyas there were worried about how the strong winds and a possible storm surge might affect their camp.
“If it’s a big storm, we will have a lot of trouble,” he said, adding that the IDPs there had refused to be evacuated to a military base because they wanted to return to their former neighborhoods in Sittwe in order to escape the storm. “There are 14,000 homes in our quarter that are ready to use,” he said.
Maung Maung, who used to own a medicine store in Sittwe, said all families at the camp had been chased out of the town when the Arakanese Buddhist majority clashed with the Rohingya communities last year. “We want to go back to where we lived before,” he said, before adding that armed police units were stationed on the road to Sittwe to prevent Rohingyas from accessing the town.
On Wednesday, dozens of armed police and soldiers could be seen at the IDP camps, Buddhist monasteries and along the roads.
During waves of inter-communal violence in June and October 2012, about 140,000 people were displaced. Most of them are Rohingyas, while the Muslim group also bore the brunt of the attacks.
The US-based Human Rights Watch (HRW) alleges that local authorities were complicit in the violence against the Rohingyas and have restricted their movements and aid deliveries to their camps. The rights group said the acts amount to ethnic cleansing of the Rohingyas, removing them from parts of Arakan State.
Maung Maung said that mobile health clinic had stopped coming to Te Chaung camp three months ago, leaving the population of 2649 registered IDPs without any form of healthcare. “The government promised us again and again that they would help us, but they did nothing.”
Abu Tahay, a Rohingya leader from Maungdaw Township in northern Arakan and chairman of the Union Nationals Development Party, said that it was understandable that the IDPs rejected the government’s evacuation plan of moving all Rohingyas around Sittwe into one military-controlled camp.
“If they go the military base, after the storm is over they will be under the military’s control. They will lose all rights to move,” he said, “They worry that they will be moved to new resettlement sites, like was recommended in the government’s [Arakan] report.” “They are worried about this kind of segregation.”
Human Rights Watch said in a statement on Tuesday that Burma’s government had ignored the repeated warnings from foreign governments and aid groups to move the Rohingya IDPs from the low-lying sites ahead of the rainy season, which often brings storms and cyclones to the Arakan coast.
“If the government fails to evacuate those at risk, any disaster that results will not be natural, but man-made,” Brad Adam, the group’s Asia director said.
(Source: THE IRRAWADDY)