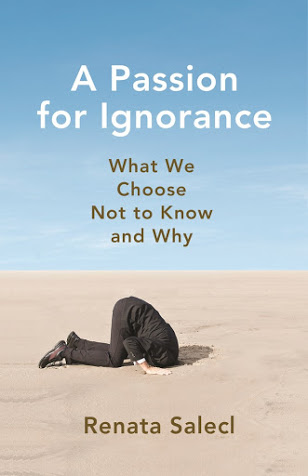 Sudhirendar Sharma
Our taste for ignorance is a strategic tool for autocracies, a drug spurring mindless consumerism and turning crucial profit.

The cover picture of this pithy book says it all, ignorance could be a blissful reality as it does not involve not knowing but constitutes an abject surrender to denial in the event of reality becoming too hard or painful to grasp. Nothing matches this better than the abject denial by leaders at the first ever online G20 Summit in late March, proclaiming that the world ‘will overcome the pandemic’. Such collective denial by world leaders has cost the society valuable lives and livelihoods while the corona virus has continued to rampage the world, confirming thereby that democracy has become a pathetic belief in the collective wisdom of individual ignorance. For Renata Salecl, a professor of philosophy at the University of London, intriguing is the overwhelming relevance of ignorance in post-truth era when we are effectively swimming in constant surge of information and misinformation.

Ignorance is not a new invention though, but an age-old human trait that plays out in many different aspects of daily life. Instances from daily existence do reflect that feigning ignorance in matters of love, illness and trauma has been found critical in keeping the desire of being active and alive. But why being ignorant at times works better than being knowledgeable is the question that Salecl explores through the realm of philosophy, psychoanalysis, and popular culture. While there is little denying that people in the grip of anxiety use ignorance as an efficient defense, it is baffling that the so-called knowledge economy has turned upside down as an ignorance economy. As a result, ignorance holds both social and political currency that knowledge does not.
One would tend to agree with Salecl that in this technology-driven world, to embrace ignorance is more a matter of choice. ‘To know or not to know’ is context specific and of vital importance for any individual. The French philosopher Michael Foucault may have equated power with knowledge in his seminal work during the mid-twentieth century, understanding how power relates to ignorance today holds much relevance. More so, as the rise of cognitive inertia in the post-truth era has helped leaders persist with bundle of lies while more and more people increasingly show indifferent to making a distinction between what is a truth and what is a lie?
A Passion of Ignorance could not have come at a better time as ignorance is fast gaining increased legitimacy in the public space, and there is little by way of explanation for this growing trend. The book cautions that collective ignorance is emerging as a passion, letting it be manipulated as a strategic tool for autocratic politics. Lack of knowledge is no longer a matter of concern as a search engine such as Google is only a click away. Alarming though is the fact that with an easy access to information, everyone has become an amateur expert while casting serious aspersions towards any form of professional expertise.
Are we then staring at a future when the society will greatly depend on its ability to inhibit intellectual capabilities? Current skepticism for knowledge may indicate so but Salecl considers it as a transiting phase that has light at the end of the tunnel. With a rising number of people actively choosing not to know and with little by way of distinction that can be made to ascertain what is known is true or false, suggests Salcel, the world may indeed be heading towards reclaiming the role of knowledge. Since our anxieties for lack of knowledge have yet to reach a critical threshold, it is anybody’s guess when the end of the tunnel will indeed get sighted.
A Passion for Ignorance remains inconclusive but unfolds aspects that explain why acquiring knowledge has taken a backseat in the quest for economic growth, and how the process may be reversed? However, it offers a multi-layered narrative on how ignorance manifests itself in various facets of science, technology and psychology, and why technology-driven capitalism will continue to nurture ignorance to remain in the business of profit. Little gets realized that be it packaged products or acquired information, consumers have little clue how the algorithms are at work to promote ignorance in order to make profits. Unless people begin to question their trust in pre-packaged knowledge by pressing the anxiety button about the unknown, our capacity to remain willfully ignorant will only expand and flourish.
Written with academic clarity and professional empathy, Prof. Renata Salecl takes the reader into an insightful journey on why we are what we have become, not realizing that we are increasingly being left out in our highly unequal society. The corona virus onslaught has only exposed our systemic vulnerability at the hands of the powers-that-be to remain ignorant, and thus exploited. A Passage for Ignorance is a call for breaking free from the interplay of circumstance and choice that only aims to keep all of us trapped in the sphere of ignorance.
A Passion for Ignorance
by Renata Salecl
Princeton University Press, USA
Extent: 195, Price: $24.95
(Sudhirendar Sharma is a writer on development issues based in New Delhi, India)
First published in weekly Outlook, issue dated Nov 7, 2020.