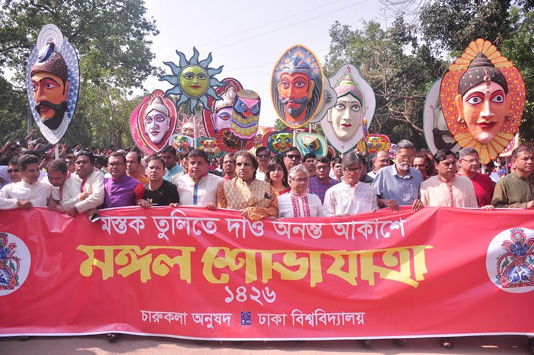 DU Correspondent
As dawn broke yesterday, thousands of people thronged the streets and different popular places of Dhaka University as the nation celebrated its traditional and vibrant festival Pahela Baishakh to welcome the Bangla New Year 1426.
The day broke with the chirping of birds as usual, but the singing of “Esho hey Baishakh esho esho” gave the day really a festive dimension.
Rich in culture, tradition and heritage, people of all castes, creeds and classes take the same identity as Bangalees are to welcome the first day of the Bangla New Year with due fervour, fanfare and festivity. Pahela Baishakh holds a special place in every Bangalee’s heart.
Dhaka University celebrated the first day of Bangla Noboborsho “Pahela Baishakh” with amid festivity and fanfare.
With the theme “Mostok Tulite Dao Ananta Akashe”, the Faculty of Fine Arts brought out the traditional ‘Mangal Shobhajatra’ from its premises at 9 am with a call to establish a non-communal society.
People from all walks of life including many foreigners wearing traditional Bengali dresses joined the ‘Mangal Shobhajatra’, which is recognised by the United Nations Educational, Scientific and Cultural Organisation (UNESCO)’s as the Intangible Cultural Heritage of Humanity.
DU Vice-Chancellor Prof Md. Akhtaruzzaman, Pro-VC (Admin) Prof Samad, Proctor Golam Rabbani and teachers and students led the procession.
Earlier, the New Year celebration started with a musical function titled ‘Esho he Baishakh’ at the historic Battala, in front of arts building organised by the Department of Music.
Young women wore white sarees with red borders and adorned themselves with bangles, flowers, and tips, while men wore white pyjamas and panjabi or kurta.
Pahela Baishakh is one of the most colourful festivals through which the Bangalees bid farewell to the old year and welcome the New Year.