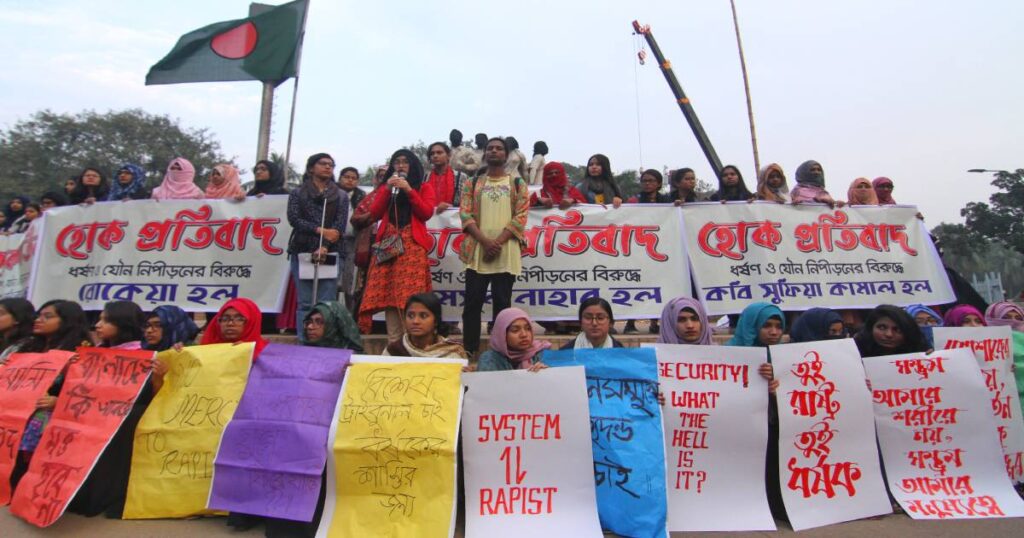 Dhaka, Jan 08 – Teachers and students of Dhaka University (DU) on Wednesday demanded that capital punishment be given to the rapist of a student of the university as demonstrations on the campus continued for the 3rd consecutive day. Students held a rally, formed a human chain and brought out a procession while teachers formed another human chain on the campus to press for the demand.

Under the banner of 2017-18, 2016-17 and 2015-16 batches, several hundred students from different dormitories and departments staged a protest rally.
They also brought out a procession which paraded the main points of the campus.
The protesters were seen chanting slogans- “We want justice, Hang the rapist”.
Besides, around 350 students of the DU History department formed a human chain at the foot of Aparajeya Bangla to press for the demand.

Meanwhile, Dhaka University Teachers’ Association (Duta) also formed a human chain on the campus.
Joining the programme, DU Vice-Chancellor Prof Dr Md Akhtaruzzaman said, “We’re demanding highest punishment for the culprit. Such an incident is never acceptable. All students are like our children. We won’t tolerate any type of threat to our students.”
He also put emphasis on social awareness to prevent such incidents.
Duta President Prof ASM Maksud Kamal said the victim was like their daughter. “We demand immediate punishment of the rapist and hope the government will ensure justice by giving exemplary punishment to the culprit as soon as possible,” he said.
He also thanked law enforcers for the prompt arrest of the rapist.
Duta General Secretary Nizamul Hoque Bhuiyan conducted the human chain while Proctor Prof AKM Golam Rabbani, Duta Vice-president Prof Lutfor Rahman, Social Sciences faculty Dean Prof Dr Sadeka Halim and former Proctor Amzad Hossain, among others, attended the human chain.
The second-year student of Dhaka University was raped and tortured in Kurmitola on Sunday night. The incident sparked a widespread protest on the campus and elsewhere across the country.
Members of Rapid Action Battalion (Rab) arrested the rapist from Dhaka’s Shewra rail crossing area around 4:05 am. – UNB