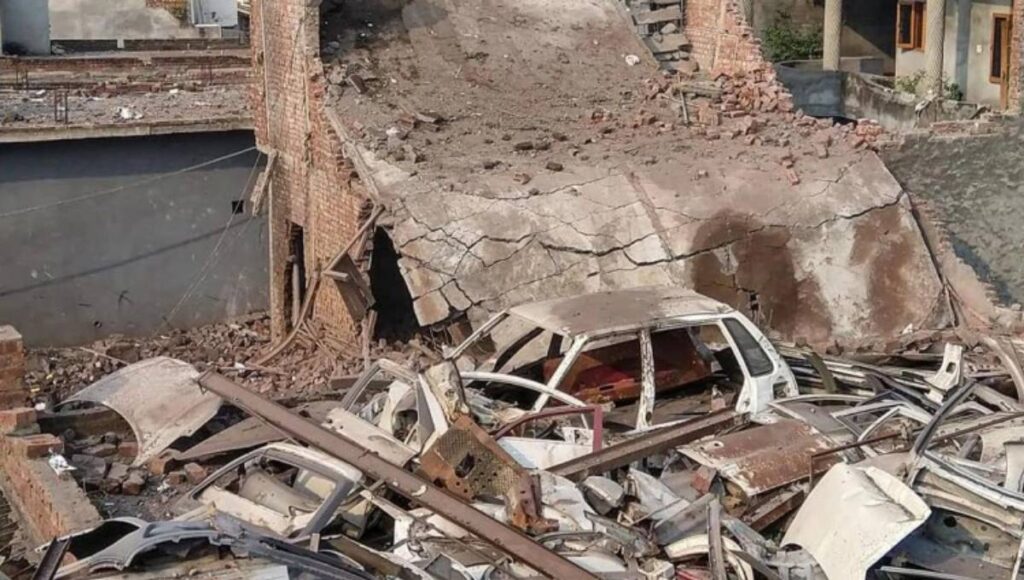 At least 23 people were killed and 27 injured after a massive explosion on Wednesday at an unauthorised firecracker manufacturing factory in a densely-populated residential area in East Punjab’s Gurdaspur, India. Several people were feared trapped under the debris and rescue work continued till late in the night, reports NDTV. The incident took place around 4 pm at the factory located in a residential area in Gurdaspur’s Batala, Inspector General (Border Range) SPS Parmar said.
The impact of the explosion was such that the factory was completely destroyed and nearby buildings were damaged too. Window panes were shattered and the roof of a couple of buildings came down, news agency PTI reported. An eyewitness told PTI that a car landed in a drain due to the impact of the explosion. Locals said the explosion was heard kilometres away.
“When I heard the loud blast, I fell down. When I gained consciousness, I found myself in hospital,” Batala resident Rajpal Khokkar said.
Another man, Sukhdev Singh, told PTI two others who were with him to buy crackers died in the blast.
Locals complained the firecracker unit was running illegally for many years. It was manufacturing and storing crackers for a ‘Nagar kirtan’ – a religious procession relating to the birth anniversary celebrations of Sikhism’s founder Guru Nanak Dev – slated to reach the town late Wednesday evening, news agency IANS reported.
“The firecracker factory has been working in this locality for many years. We have complained against the factory seven-eight times to the local administration, but no action has been taken against it,” a local resident told the media.
He said a similar blast occurred in this area on January 2017, leaving one person dead and three injured.
Chief Minister Amarinder Singh said rescue operations are underway with the District Collector and the Senior Superintendent of Police heading the relief efforts.
“Deeply anguished to learn of the loss of lives due to the blast in the firecracker factory in Batala. Rescue operations are underway with the DC & SSP heading the relief efforts,” he tweeted.
The chief minister of East Punjab also launched a magisterial inquiry into the explosion.
Gurdaspur MP Sunny Deol too expressed grief over the incident. “Saddened to hear about the news of blast in Batala factory. NDRF teams and local administration have been rushed for the rescue operation,” Mr Deol said in his tweet.
Teams of the National Disaster Response Force or NDRF and the State Disaster Response Force or SDRF are aiding rescue operations. Senior police and district administration are also present at the spot. – GreenWatch Dhaka with UNB