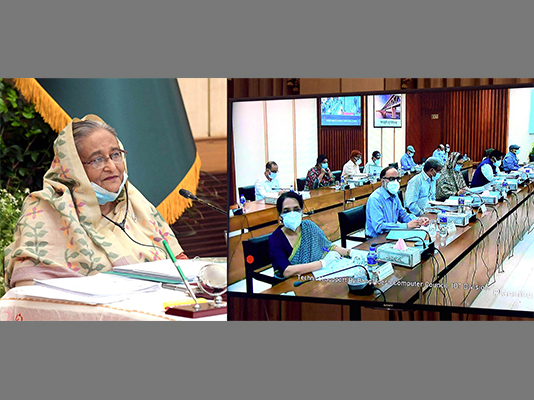 Dhaka, July 6: The Executive Committee of the National Economic Council (Ecnec) today approved a total of nine projects involving an overall estimated cost of Taka 2,744.44 crore including one for dredging Dhepa and Gorveswari River with Taka 327.27 crore.The approval came from the first Ecnec meeting of the new fiscal year (2020-21) held at the NEC Conference Room in the city’s Sher-e-Bangla Nagar area with Ecnec chairperson and Prime Minister Sheikh Hasina in the chair.
The Prime Minister and Planning Minister MA Mannan joined the meeting from Ganobhaban through video conference.
“Today’s Ecnec meeting approved nine projects under four ministries and the total estimated cost of these projects is Tk 2,744.44 crore. Of the cost, Taka 1,353.70 will be borne from the state exchequer, while Taka 440.79 crore from the own funds of the agencies concerned and Taka 949.96 crore as project assistance,” said the Planning Minister at a virtual press briefing after the meeting.
Bangladesh Water Development Board under the Ministry of Water Resources will implement the Rehabilitation of Dinajpur Town Protection Project and Dredging of Dhepa and Gorveswari Rivers adjacent to Dinajpur Town by June 2023.
The main aim of this project is to protect the Dinajpur town from flood and erosion through dredging of these rivers.
The main project operations include 7,515 km riverbank protection, another 2,250 km of riverbank protection, some 75.50 km of River dredging, some 46.32 km of embankment reshaping, construction of one regulator and renovation of 15 regulators.
The day’s approved projects include four projects under LGRD and Cooperatives Ministry, two each under the Power, Energy and Mineral Resources Ministry and the Water Resources Ministry, and the rest one under the Shipping Ministry.
The four projects under LGRD and Cooperative Ministry are Construction of 1490-metre Long PC Girder Bridge on Panchpir Bazar-Chilmari Upazila Head Quarter Road over the Teesta River at Sundarganj Upazila under Gaibandha district (2nd revised) Project; Rupganj Jalshiri Abashon Connecting Road Development (1st revised) Project; Development of Rural Infrastructures in Jamalpur and Sherpur Project; and Bridge Construction over Dakatia River at Faridganj in Chandpur Project.
The two projects under the Power, Energy and Mineral Resources Ministry are Installation of Single Point Mooring (SPM) with double pipelines (2nd revised) Project; Ghorashal Unit Third Repowering (1st revised) Project.
The two projects under the Water Resources Ministry are rehabilitation of three projects in Dhamurhat, Patnitola and Mohadebpur upazila under Noagaon district and Atrai River Bank Protection including dredging works project.
The lone project under the Shipping Ministry is Establishment of global marine distress and safety and integrated marine navigation system (EGIMNS) Project.
Ministers and State Ministers attended the meeting while Planning Commission members and secretaries concerned were present.
The Planning Minister said the country’s foreign currency reserve has hit an ever new height reaching US$ 36 billion.
In this context, Mannan said the Prime Minister in the meeting has raised an idea for Bangladesh Bank and others concerned to assess the possible economic impacts if the government takes loan from the foreign currency reserve keeping a logical amount of the reserve in hand to meet the import expenses.
“The Prime Minister thinks that keeping the reserve worth for three-month import expenses in the hand is usually safe. But, now we can meet the one-year import expenses (with the current reserve). So, we may take loans domestically from our own fund keeping the logical amount of reserve in hand to meet the import expenditures,” said the Planning Minister.
He said the Prime Minister raised this idea so that Bangladesh Bank can do study over what will be the economic impact in this regard.
“We take dollars as loan from foreign sources. We can take loan from our own funds. Bangladesh Bank preserves the reserve. We may take loan from it,” Mannan quoted the Prime Minister as saying.
The Planning Minister said he supports taking loan from the reserve for the development projects. “Though interest rate of foreign loan is low, there are many conditions attached with foreign debts. So, ultimately the project becomes costs go high in many cases because of the conditions,”he said.
Sheikh Hasina also directed the authorities concerned to be careful over maintaining the proper height of the bridges while construction of such structures on the rivers.