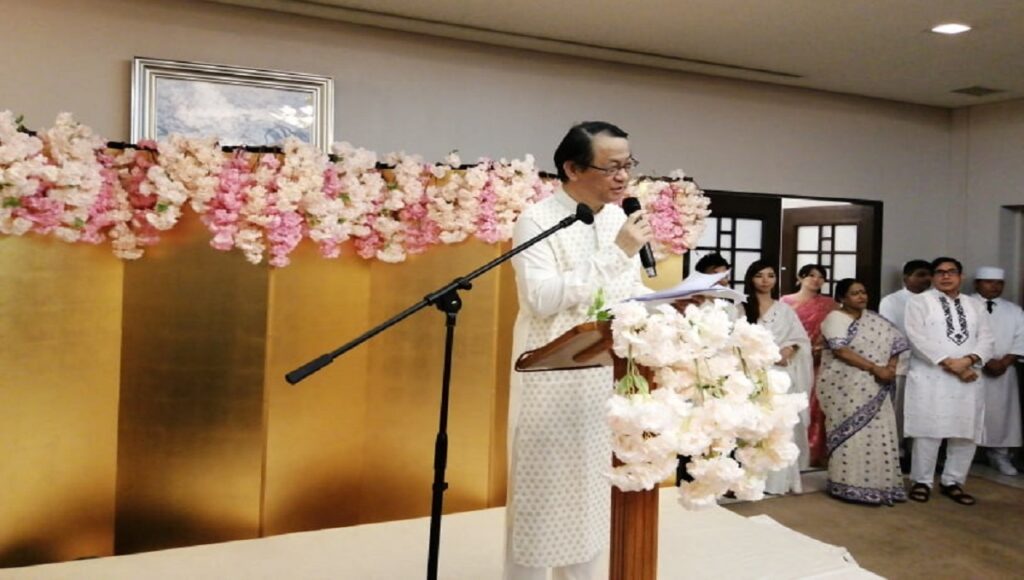 It’s time for Bangladesh to bravely tackle with drastic structural reforms, says outgoing Japanese AmbassadorHiroyasu Izumi
Dhaka, Sept 17 – Outgoing Japanese Ambassador to Bangladesh Hiroyasu Izumi on Tuesday hoped that Bangladesh will become a developed and prosperous country as the centre of the “greater Bengal economy” and the two countries will enjoy stronger ties of friendship.“I have the dream,” said Ambassador Izumi, who spent two years in Bangladesh, adding that it is time for Bangladesh to “bravely tackle with drastic structural reforms”.
“It is very much possible to realise the dream of Sonar Bangla,” he said.
The Japanese envoy was addressing his farewell reception at his residence in the evening. Prime Minister’s Foreign Affairs Adviser Dr Gowher Rizvi also spoke at the programme.
“It’s very much possible (to achieve goals) if only Bangladesh can henceforth follow the path of sound development,” he said adding that Bangladesh can do it under the “strong and stable” leadership of Prime Minister Sheikh Hasina.
Veteran Awami League leader Tofail Ahmed, Prime Minister’s Political Affairs Adviser HT Imam, her Energy Affairs Adviser Tawfiq-e-Elahi Chowdhury, State Minister for Energy Nasrul Hamid Bipu, ambassadors and high commissioners stationed in Dhaka, business leaders and opposition leaders, cultural personalities, senior journalists and Japanese societies were also present.
Ambassador Izumi said Bangladesh is now on a historical stage of opportunity for development. “It’s recently reported that its GDP growth rate in the past 10 years marked as one of the highest in the world surpassing that of India and China,” he added.
He said Bangladesh must pursue both economic development and political democratisation hand in hand to attain Sustainable Development Goals (SDGs).
Talking about Bangladesh-Japan growing relations, the Ambassador said, “I see the Bangladesh-Japan relationship as a cherry tree. You, me and all are the blossoms. And when we come together and work together, it is a glorious sight.”
He said the bilateral relations, during his tenure, has grown larger and become more significant. “Big infrastructure projects are now ongoing. A number of Japanese companies have become interested in investing in this country,” he noted.
“It was a great pleasure and a badge of honour for me to serve as an ambassador to Bangladesh,” said the Ambassador, adding that diplomatic ties between the two countries have further strengthened after reciprocal visits conducted by foreign ministers of Japan and Bangladesh.
Prime Minister Hasina’s visit to Japan has set an important milestone in our bilateral relations, he noted.
“I’d also like to thank the government of Bangladesh for providing substantial security for Japanese nationals and companies,” the outgoing ambassador said.
He hoped that amicable bilateral relations will reach new heights as he looks forward to the 50th anniversary of Japan-Bangladesh diplomatic relations in 2022.
Dr Gowher Rizvi said Japan stood by Bangladesh since the establishment of diplomatic relations between the two countries and has been a tested friend of Bangladesh.
He said the friendship between the two countries has been “extraordinarily deep, strong” under the short tenure of the outgoing Japanese Ambassador.
“You’ve become such a part of our family, our country and people,” Dr Gowher said, adding that the bilateral relationship has now been “deepened and diversified”.
The Adviser said in the two years of the Japanese ambassador’s tenure in Dhaka he pushed them really hard.
“Normally we run after our development partners. In your case, you came forward and pushed us,” he said mentioning the progress of some mega projects making Bangladesh a part of Japan’s BIG B (Bay of Bengal Industrial Growth Belt) initiative.
Famous singer Farida Parveen, Ustad Abdul Hakim and two Japanese singers also performed at the reception. The ambassador himself sang a Bangla song. – UNB