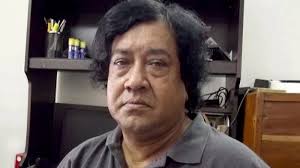 Eminent sculptor Mrinal Haque passed away at a city hospital in the early hours of Saturday. He was 62. Mrinal Haque, who had been suffering from various health complications including diabetes, was admitted to the Evercare Hospital Dhaka after he fell sick on Friday at his Gulshan residence due to low sugar and oxygen levels, said family members.
His Namaz-E-Janaza will be held at the Gulshan Azad Mosque after Asr prayers and he will be buried at the Martyred Intellectual Memorial graveyard at Mirpur.
Born on September 9, 1958, in Rajshahi, Mrinal Haque received his education from Rajshahi Cadet College. He later received his Bachelor and Masters degrees from the Institute of Fine Arts of the University of Dhaka.
He went to the United States in 1995 and came back to his motherland in 2002. He earned fame for various monumental sculptures and murals in both home and abroad, including ‘Balaka’ at Motijheel in the capital; the ‘Golden Jubilee Tower’ marking Rajshahi University’s Golden Jubilee; mosaic paintings, sculptures and murals in New York City at the United States and more.
Besides, he participated and received awards in many national and international exhibitions. His exhibition was held at the Consulate of Bangladesh in New York City in 1999, celebrating the 28th anniversary of Independence of Bangladesh portraying themes of the Liberation War.
Inspired by the world-famous Madame Tussaud’s wax museums, Mrinal opened his own celebrity museum in Bangladesh under the title of “Mrinal Haque’s Celebrity Gallery” on December 8, 2018 at Gulshan in the capital, reports UNB.