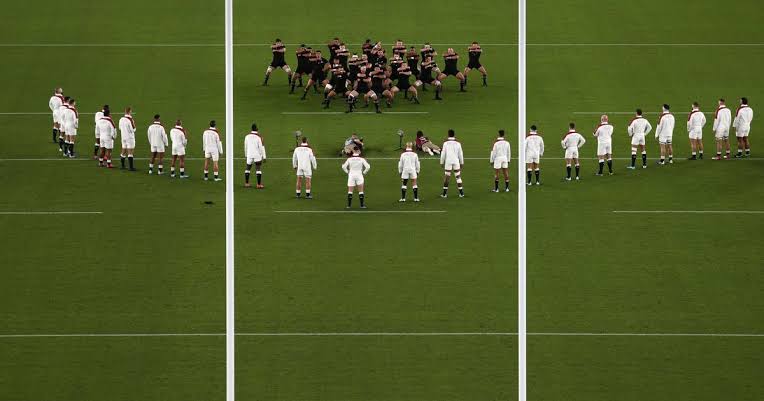 There’s been plenty of derision over the fine imposed on England for its players’ response to New Zealand’s pre-match haka in the Rugby World Cup semifinals, a scene which tournament organizers used to promote the contest and had 1.2 million views on social media.The All Blacks certainly didn’t take offense, with coach Steve Hansen describing England’s actions as “fantastic.”
England’s fine was confirmed Wednesday by World Rugby, five days after a half-dozen English players crossed the halfway line in its response to the All Blacks’ traditional pre-match challenge.
The governing body said England breached “tournament rules relating to cultural challenges, which states that no players from the team receiving the challenge may advance beyond the halfway line.”
England’s players stood in a V-formation with players on an angle shaped to flank the haka. The fine, reported to be 2,500 pounds ($3,200), was in line with protocol that operates across the international game, World Rugby said. The French were fined in 2011 for advancing toward the haka.
“Dangerous territory here,” Hansen said when asked to comment on England’s fine. “I thought their response was fantastic. They didn’t get fined for doing what they did. They got fined for going over halfway.”
Reserve prop Joe Marler was standing several meters on New Zealand’s side of the halfway line and refused to retreat when match officials gestured to him to get behind halfway. Other teammates moved back closer to halfway, but Marler spun around but stood his ground.
Hansen said Marler perhaps should have gone back when “he got told two or three times.”
But “I thought the response was brilliant,” said Hansen, who will step down as All Blacks coach after Friday’s third-place playoff against Wales. “If you understand the haka, the haka requires a response.
“I thought it was brilliant. Quite imaginative, too.”
Former England captain Will Carling said New Zealand had the right to perform the haka but had no right to dictate how opponents or the crowd responded to it.
“It is a challenge,” Carling tweeted, “so teams and opposition fans can react as they wish.”
The tension lit up social media, with the Rugby World Cup’s official Twitter site getting more than 1.2 million hits by Wednesday for the video, which finished with the comments: “You want box office? You’ve got it. How about the challenge from England v New Zealand?”
All Blacks captain Kieran Read said immediately after England’s 19-7 semifinal win that the response to the haka had no impact on the game.
If there was an impact, it was all in England’s favor. The English scored a try in the second minute and were never behind on the scoreboard against the two-time defending champions.
It ended England’s run of six consecutive losses against the All Blacks and secured a spot in Saturday’s Rugby World Cup final against South Africa, reports AP, Tokyo.