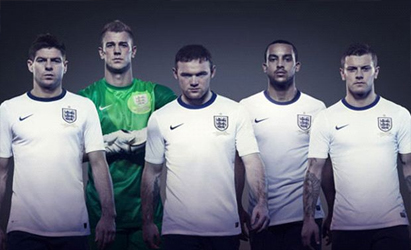 The brand new Nike England home shirt has been unveiled, with Arsenal midfielder Jack Wilshere sharing the first sighting of the new kit via Twitter.The 21-year-old returned to his old school in Hertfordshire to watch a football training session at The Priory School in Hitchin before picking out one student to model the shirt.
Wilshere posted the photograph on his Twitter account saying: “Like this kid, my England dream began here, so he was the first in #theshirt – England’s new home kit.”
Official photos were later released showing England’s star players – Wilshere, Wayne Rooney, Joe Hart, Theo Walcott and Steven Gerrard – donning the kit.
The new shirt, which features a gold ribbon inscribed with “150 years” to the celebrate the Football Association’s anniversary, is set to be worn in upcoming friendlies against the Republic of Ireland and Brazil.
Wilshere, despite being the first to post the photo, may not be the first to wear it should England play in the new kit next week. The Gunners midfielder is set to undergo ankle surgery this week and has been ruled out of the friendly matches.
(Source: Goal.com)