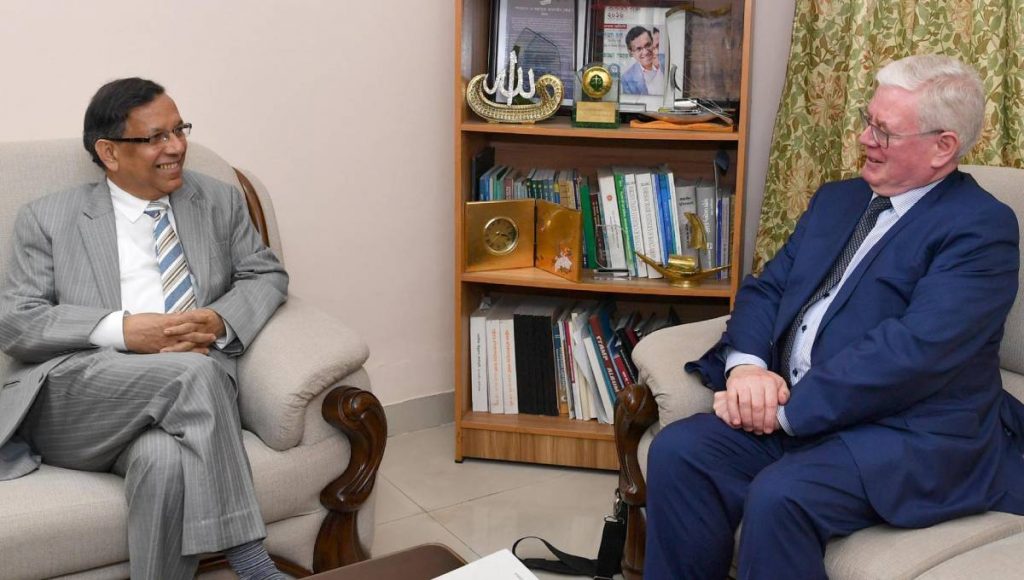 Dhaka, EUDEL Press Office: EU Special Representative (EUSR) for Human Rights Eamon Gilmore visited Bangladesh on 10-11 June 2019. This visit, the first ever of a EUSR for Human Rights to Bangladesh, reflects the EU’s commitment to engaging with the Government of Bangladesh, and civil society.
“Bangladesh is an important country for the European Union in the region. I have come here to visit Cox’s Bazar and speak with the Rohingya refugees, as well as with the local communities hosting the refugees”, said EU Special Representative Gilmore. “The international community is grateful for Bangladesh’s generous hosting of the Rohingya, and we as the European Union are doing our part to address the crisis. In Dhaka, I have held various meetings devoted to a wide range of human rights issues, including core standards, an area in which Bangladesh needs to make urgent progress”.
Special Representative Gilmore had meetings with Law, Justice and Parliamentary Minister H.E. Mr Anisul Huq, the Acting UN Resident Coordinator and ILO Country Director, UNHCR, IOM, UNDP, UNICEF, UNFPA, UN Women Country Directors, as well as with representatives of NGOs and trade unions, according to a EUDEL press release.
Bdnews24.com reported, Special Envoy of the European Union Human Rights Eamon Gilmore has expressed his concern over the imprisonment of opposition BNP chief Khaleda Zia.
She has been sentenced to prison for graft involving the Zia Orphanage Trust, a case filed by the military-backed caretaker government in 2007.
Gilmore said he will not make comment on whether the court or judicial process is right or wrong.
“The concern is first of all in the context of the overall political environment in the country. She is a woman of advancing years and there are health issues and there always dimension of issues that we talked about,” he said after his meeting with Law Minister Anisul Huq.
During the they discussed a wide range of human rights issues including Rohingya crisis, Digital Security Act, extrajudicial killings and the last general elections.
The envoy said that the EU is expecting a government response to the recommendations made by experts on the last general elections observations. He said the minister told him they will do so soon.
This is his first visit to Bangladesh on the way to Myanmar for the annual human rights meeting in Naypyitaw.
The law minister asked Gilmore to convince Myanmar to take back Rohingyas by creating a safe environment.
Asked why the EU is concerned about Khaleda’s jailing by the court, the envoy said: “It’s fair to say that when we see, in any country, a major opposition leader who has been imprisoned, it raises questions. What is happening? Why is this happening?”
He said his fellow parliamentarians in the EU will also ask him similar questions after his visit.
Gilmore said he also discussed issues related to political freedom and drew the minister’s attention to the EU election expert mission’s report sent to the Bangladesh Election Commission.
The EUDEL press release adds: Special Envoy of the European Union Human Rights Eamon Gilmore has expressed his concern over the imprisonment of opposition BNP chief Khaleda Zia.
Eamon Gilmore to Cox’s Bazar, where he visited the refugee camps, met with members of the Rohingya refugee and local communities, as well as with the Refugee Relief and Repatriation Commissioner. Following this Gilmore will travel to Myanmar for discussions with the authorities.
EU Special Representative Gilmore engaged on a wide scope of issues while in Dhaka, including the rule of law and the law enforcement, elections, freedom of expression and of the media, freedom of assembly, women’s and children’s rights, human rights cooperation in the UN, rights of the persons belonging to minorities and the implementation of Chittagong Hill Tracts Peace Accord.
The European Union is monitoring the human and rights situation in Bangladesh closely. Human rights, including rights, are an important element in bilateral EU-Bangladesh relations, as well as in the trade relations under the “Everything but Arms” trade scheme. Special Representative Gilmore the need for the Government of Bangladesh to address the situation on a number of issues, such as inclusiveness of the political process, space for the civil society, freedom of expression and of media, the situation of women, as well as core standards.
The situation of the Rohingyas was also discussed. Bangladesh’s hospitality for the Rohingya refugees, including by the host communities, was cited by the Special Representative as an example of solidarity for all of the global community. The European Union is making every effort to support Bangladesh in this important humanitarian mission, at financial and political levels and has € 104.5 million in financial support for the refugees and host communities in Bangladesh since 2017. – EUDEL press release