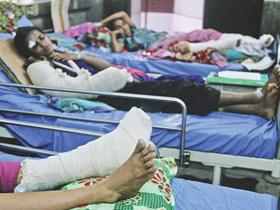 It was only a one-year plan of Shamsul Alam to work at a readymade garment (RMG) factory and then to concentrate on his graduation at a local college, but the Rana Plaza collapse changed it all.“It has shattered my dreams. I wanted to save money from my income so as to be able to buy the books for my graduation courses,” said Shamsul Alam, who joined New Wave Style, housed in Rana Plaza, just after he passed the higher secondary certificate (HSC) examination from Rajshahi board in 2012.
Barely two months back, had Shamsul gone to his village home in Naogaon. He stayed there for four days and completed his admission for the graduation at a local college.
“Now I doubt whether I’ll be able to stand on my feet again. How hard it will be if I have to pass the rest of my life lying on a bed like this,” he murmured as he was lying like a paralysed man on a bed at the National Institute of Traumatology and Orthopedic Rehabilitation (NITOR) on Tuesday.
Shamsul was rescued from the 7th floor within hours of the Rana Plaza collapse on April 24. He had serious injuries at the rear of the head, at his back, and around the waist as he fell under a broken beam. The doctors did a surgery on his back and the rear of the head.
“They’ll cut the stitches in just two or three days. But they’ve done nothing to remove the problem around the waist. You see he has no feeling in the legs. He can’t even move or slant to a side on the bed,” said Shamsul’s father Abdul Jalil, a farmer.
“The doctors are persuading us to release Shamsul from the hospital, they said there’s nothing to be done…no operation…about the waist and about the legs,” he added.
“They (medical officials) are treating us very badly. They say my daughter will only need rest at home. Again and again, they’re mounting pressure for her release from the hospital. But, you see, she’s still unable to move her head,” said Khodeza’s mother.
Other patients rescued from the collapse site also complained that the doctors and nurses are now advising them to take the release from the hospital. Most of the injured also claimed that they are not even paid their salary as committed by the BGMEA (Bangladesh Garment Manufacturers and Exporters Association), let alone the question of proper compensation
for the losses and damages to limbs.
“I’ll need six months to stand on my feet. Nothing is sure whether I’ll be fit again to earn my livelihood for the rest of my life. Can they compensate this loss? Can they give back my leg?” questioned Rehana while showing her left leg. She had several fractures in her two legs.
Talking to UNB, Nitor resident doctor Md Abdul Quader said 29 out of the
115 admitted patients were released from the hospital on Monday.
“We’ll keep patients with serious injuries on the spinal cord or with paraplegia (impediment in sensory functions) as long as it is required. But they’ll need rehabilitation in the long run,” he said, adding that NITOR has 18 such cases among the patients.
“No one can tell now how many of these 18 patients will be able to walk again in the lifetime. So, we’re prioritising them in our rehabilitation plan,” he added.
Quader also noted that Nitor right now has eight patients who have undergone amputation of their limbs. “A several more may need to undergo the amputation. We’ve also conducted faciotomy (a limb saving procedure)—they’ll also stay in the hospital for some days more.”
“We’re advising some patients to take the release and take rest at their respective homes – mostly those having less serious injuries. We’re also recommending home-rest to those patients, whose injuries have no surgical remedy, but complete rest,” he said.
The patients having psychological trauma have been under regular counseling by experts, both from the government and the private organisations, he added.
Quader also noted that Nitor has so far received about Tk 2 crore from kind citizens as donation for the injured. The donation will be distributed among those fated to lifetime impediment of some sort.
About the allegations of rude behaviour by medical officials, he said, “It’s misunderstanding, nothing else. Some problems have no surgical remedy. But the patients think we’re shoving off responsibility. We’re trying to make them understand that they need home-rest.”
“But they’ll be needing regular monitoring. At the time of release of each and every patient, we’re fixing with them the dates for the further check-ups of their condition,” said Quader. UNB)