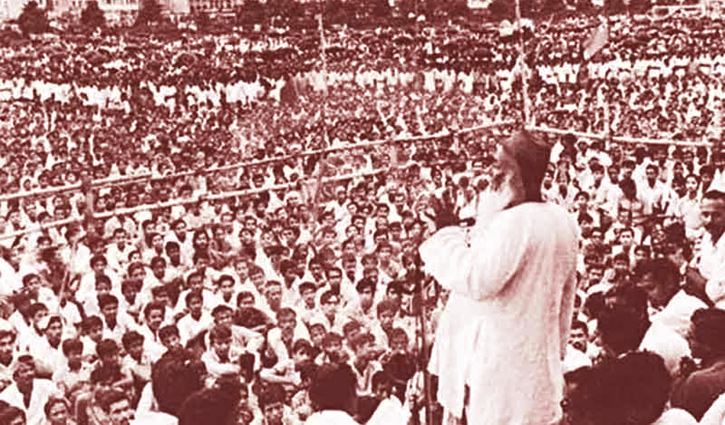 Dhaka, May 16 :  Recalling the historic Farakka Long March Day, the International Farakka Committee (IFC) on Sunday urged Dhaka and Delhi to sign a treaty to keep 54 common rivers flowing through the two countries from their sources to the sea.Diversion of water by constructing dams for short-term benefits is killing the natural water sources, it said in a statement.
May 16 marks the Farakka Long March Day. On this day in 1976, Moulana Abdul Hamid Khan Bhashani led the march from Rajshahi towards Farakka Barrage on the Gages as unilateral diversion of water rendered lower-riparian Bangladesh part of the river dry.
The barrage was commissioned for a period of 41 days from April 21 to May 31 in 1975. But the diversion of water was continued unilaterally, causing huge damages to the ecology in Bangladesh. One year after the long march, the 1977 Ganges Water Sharing Treaty was signed with an 80 percent guarantee clause for five years.
The second treaty on Ganges water sharing was signed in 1996 for a period of 30 years but Bangladesh is not getting water as per its terms. Unilateral water diversion by constructing dams and barrages from other common rivers, including Teesta, has increased over the years. Thus the Farakka Long March of Moulana Bhashani remains relevant even today, the IFC said.
IFC organised a long march to the Brahmaputra in Chilmari in 2005 and held a big rally of nearly one million people and drew attention to the plight of the Teesta River that was rendered dry.
In the following year on the 30th anniversary of the historic Farakka Long March, IFC organised a grand rally at Gobindadashi adjacent to the shoal of the Jamuna River in Bhuapur under Tangail.
Bangladesh owes her origins to rivers which thus form a question of her life and death, the statement noted.
The signatories to the statement are – Atiqur Rahman Salu, Chairman and Sayed Tipu Sultan, Secretary General, IFC New York; Prof. Jasim Uddin Ahmad, President, Dr. SI Khan, Senior Vice-Presient and Syed Irfanul Bari, General Secretary, IFC Bangladesh; and Mostafa Kamal Majumder, Coordinator of IFC, reports UNB.