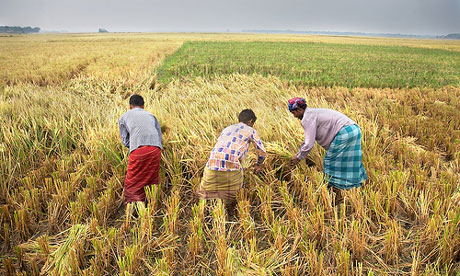 Cultivation of okra (ladies finger) is becoming popular among the farmers in six upazila of Narsingdi district. They are going for extensive farming of the green vegetable to recoup the losses form boro paddy. Farmers in the district failed to get expected profit from boro paddy due to its unfair price. As a result, to recover from the losses they are now opting for okra cultivation.

Dry weather has made it possible for farmers in the six upazilas in Narsingdi district to get yield of the vegetable even beyond expectation, enabling them to cover the earlier losses. Production of okra on one acre land costs Tk
30,000 and it sells at up to Tk1.4 lakh. Abdul Bashad of Vorather Kandi village for the first time cultivated okra on his 5 acre land. He sowed Sinjenta and Suruchi varieties of seeds spending about Tk 10,000 and now expects more than Tk 30,000 income from his produce.  Principal of Abdul Kadir Mollah City Collage said Tk 35,000 is needed to cultivate okra on one acre land. Okra worth Tk1.4 lakh can be harvested from the land between Bangla months Chaitra and Jaistha.  Shailmandi union porishoad chairman Abdul Bakir said for the first time the farmers are getting interested to cultivate the vegetable instead of boro and aman. This will generate employment opportunity for hundreds of people in the dry season, he added.