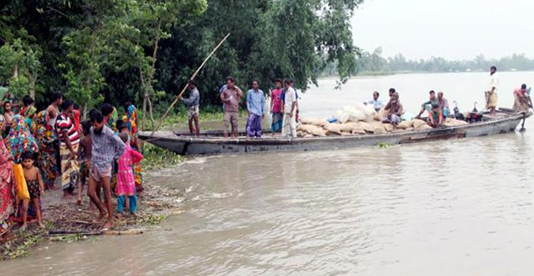 Rangpur, July 27: Water levels of all major rivers marked sharp falls at all points during the last 24 hours ending at 9 am Monday with a possibility of improvement of the flood situation in the next 24 hours in the Brahmaputra basin.
Bangladesh Water Development Board (BWDB) officials said incidents of sporadic riverbank erosion were reported from some vulnerable points in Kurigram, Lalmonirhat, Rangpur, Nilphamari, Gaibandha, Bogura, Jamalpur and Sirajganj districts.
“Water levels of all major rivers marked fall at all points following further reduction in the rate of onrushing water from the upstream despite moderate monsoon rains during the period in the basin.
However, water levels of the Brahmaputra, Dharla, Karota and Jamuna were still flowing above the danger marks (DMs) at 10 points in Kurigram, Gaibandha, Jamalpur, Bogura and Sirajganj at 9 am today.
The Brahmaputra was flowing 42cm above the DM at Noonkhawa and 57cm at Chilmari, Dharla by 25cm at Kurigram, Ghagot by 71cm at Gaibandha and Kartoa by 19cm above the DM at Chalk Rahimpur points at 9 am.
The Jamuna was flowing above the DM by 96cm at Fulchhari, 104cm at Bahadurabad, 113cm at Sariakandi, 93cm at Kazipur and by 94cm above the DM at Sirajganj points at 9 am today.
Meanwhile, officials of the Department of Agricultural Extension (DAE) said the second phase of the deluge has submerged standing crops on 12,294 hectares of land in 30 affected upazilas of all five districts in the region.
“The extent of crop damages might be higher this time due to a prolonged submergence than damages caused for short time inundation during the first phase earlier this month,” Additional Director of the DAE for Rangpur region Muhammad Ali said..
He said the flood situation is showing an improvement with recession of floodwaters from submerged croplands and field level officials are assessing the extent of crop damages in the region.
BWDB officials said all flood control embankments and structures are remaining safe in the flood-affected northern districts while some sporadic incidents of riverbank erosion have been reported with recession of floodwaters.
Water levels of all major rivers are showing a receding trend in the zone. However, a possibility of further deterioration of the situation is likely as heavy to heavy monsoon rains are expected in the adjoining northeastern Indian states in the next 72 hours.
“Along with closely monitoring the flood situation, we are conducting riverbank protection works at many points when and where necessary in Lalmonirhat, Kurigram, Rangpur and Gaibandha districts,” Ghosh added.
Additional Divisional Commissioner (General) Md. Zakir Hossain said the district administrations have further intensified relief activities in the flood-affected districts of Rangpur division.
District Relief and Rehabilitation Officer (DRRO) of Kurigram Abdul Hye Sarker said 2.50 lakh people of 62,630 families of 475 villages in 56 unions in all nine upazilas of the district have been affected by floodwaters in the second phase.
“We are continuing distribution of 190 tonnes of rice, Taka 13 lakh, 6,000 packets of dry foods, Taka four lakh for baby foods and Taka five lakh for animal fodders continues among flood-affected families across the district,” Sarker added.
Similarly, the district administrations are continuing relief activities in all other flood-ht northern districts in the Brahmaputra basin to mitigate sufferings of the affected people.