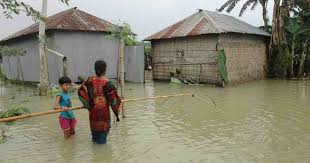 Sufferings of the flood-hit people has been intensified with deterioration of overall flood situation in Faridpur and Kurigram districts.Major rivers of the districts were flowing above the danger level at different points till Monday morning.
Besides, fresh areas are being inundated.
In Faridpur, in the last 12 hours, the water level of the Padma River in Faridpur has risen further and it was flowing 106 cm above the danger level in the morning.
Due to flood, the road communications from the district headquarters to Char Bhadrasan and Sadarpur upazilas has been snapped. Besides, cracks have been developed on different parts of the road.
On Monday morning, a concrete road of 25 no ward of the extended municipality of Faridpur sadar collapsed due to pressure of water.
Faridpur Deputy Commissioner Atul Sarkar said people of 30 unions of the district have been marooned.
Two hundred metric tons of rice and cash Tk 3 lakh have been distributed among the affected people, he said.
Sultan Mahmud, executive engineer of Faridpur Water Development Board, said the water level in the Padma River at Goalondo point in Faridpur has risen by 3 cm, inundating fresh areas in Alfadanga and Madhukhali upazilas.
Alfadanga Upazila Chairman AKM Zahid Hasan said erosion by the Madhumoti River has been continuing in several villages of three unions of the upazila since the beginning of monsoon.
In Kurigram, due to persistent rains, the water level of the Dharla River has increased by 10 cm in the last 24 hours, rendering the residents of Dharla river banks marooned.
Meanwhile, flood water entered Kanchkol area of Chilmari upazila and flooded 50 villages including Chilmari upazila headquarters.
Out of 73 unions of the district, 475 villages of 56 unions have been flooded.
Official sources said 170 metric tons of rice and cash Tk 9 lakh have been distributed so far, reports UNB.