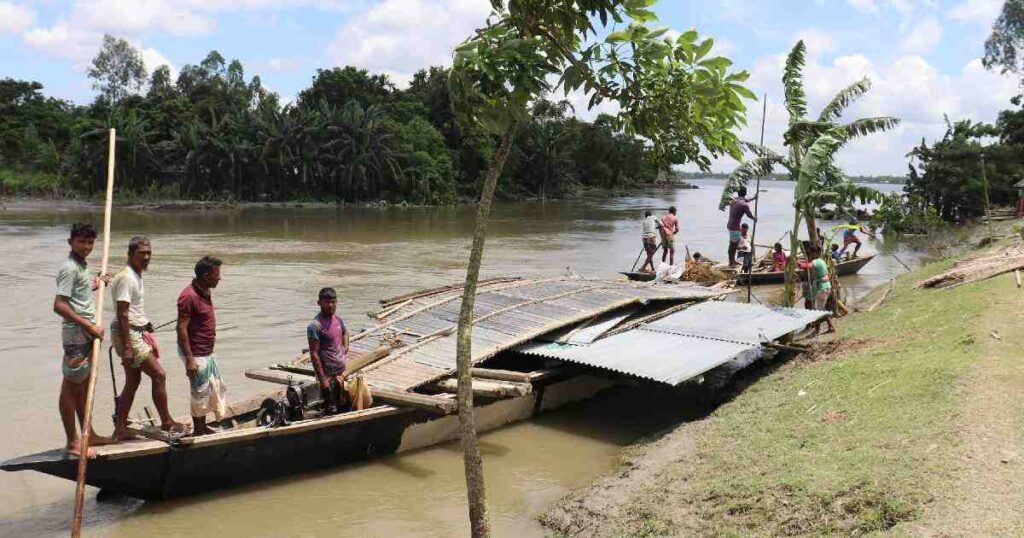 Flood situation in the Brahmaputra and the Ganges basis deteriorated was water levels started rising afresh. While hundreds of thousands of people have been marooned in floodwater, many homes have been washed away by riverbank erosion and strong currents of floodwater.
In Gaibandha, vast areas of Shaghata, Sadar, Sundarganj and Phulchhari Upazilas have been flooded after Teesta, Jamuna and Brahmaputra rivers burst their banks.
Many people have taken shelter on high places including flood protection dams while some others continue to live in their houses submerged by floodwater.
A total of 150,000 people have been marooned while many people have lost their houses to river erosion.
The people of 156 char areas including Kanchipara, Kamarjani, Mollarchar, Kapasia, Haripur, and Belka say they don’t have enough to eat.
Abdul Hye, chairman of Mollarchar union in Sadar Upazila, said residents of the char areas won’t be able to sacrifice animals as they remained jobless for the last one month due to the flood situation. “No one’s thinking of Eid this time,” he said.
Selim Pervez, chairman of Phulchhari Upazila, said they are providing rice which is inadequate for the flood-hit people. “It’s very tough to realise their sufferings without seeing them in person. Everyone is busy fighting the flood,” he said.
Fish enclosures flooded
In Sunamganj, floods in Jagannathpur Upazila have brought fish farmers to their knees.
In April, the farmers released different types of fish fry including Rui and Katla in ponds and water bodies. They invested hundreds of thousands of taka to procure the fish fry.
Things were looking good until the floods hit and washed away the fishes.
Haji Ekhlashur Rahman Akhlai and Zafar Ali, two affected fish farmers, said that their dreams have been washed away with floodwater. They have lost their capital.
The two fish farmers have lost Tk 20 lakh in three-phase floods.
Upazila Fisheries Officer Md Akhtaruzzaman said, “We have information that about 460 fish farmers have been affected so far. The amount of damage is about Tk 1 crore.”
Affected fish farmers have been assured of financial assistance and compensation. “They will get it soon,” said Akhtaruzzaman.
Thousands stranded
In Kurigram, the low-lying areas of more than a hundred chars in the basins of the Teesta and Dharla rivers have been newly flooded as the water level is rising again.
On Thursday morning, the water level of Brahmaputra receded by 8cm at Chilmari Point and was flowing at 22cm above danger point while the water level of Dharla increased by 15cm at Kurigram Bridge Point and was flowing at 20cm above the danger level.
Thousands of people are still stranded as the water of Brahmaputra is still above the danger level.
The suffering of the people who took shelter by roads, railways and dams in different places including Chilmari is increasing.
They are now suffering from food crisis and water-borne diseases.
At the same time, the erosion of Teesta has taken a serious turn at different points including Gaburhelan and Thetrai.
The affected people said the relief materials they received are insufficient. – UNB